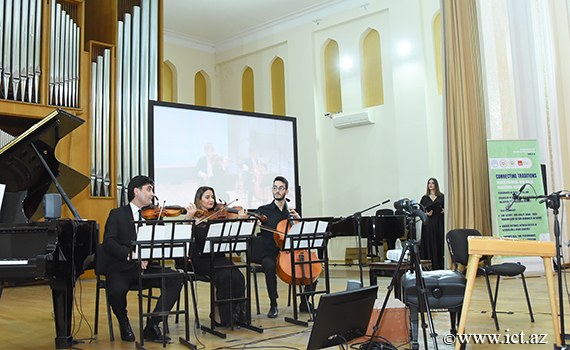 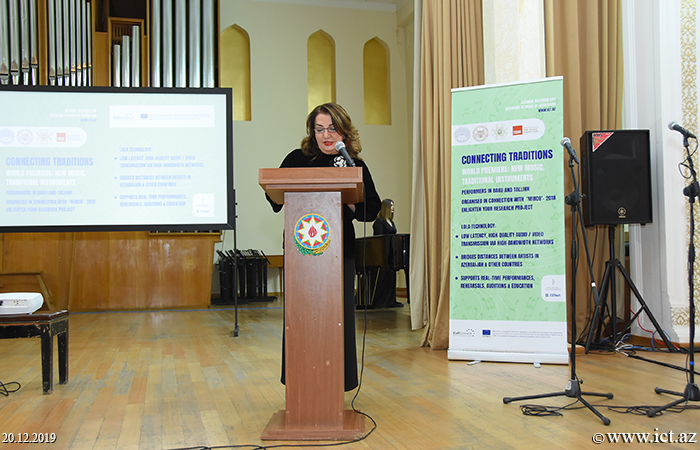 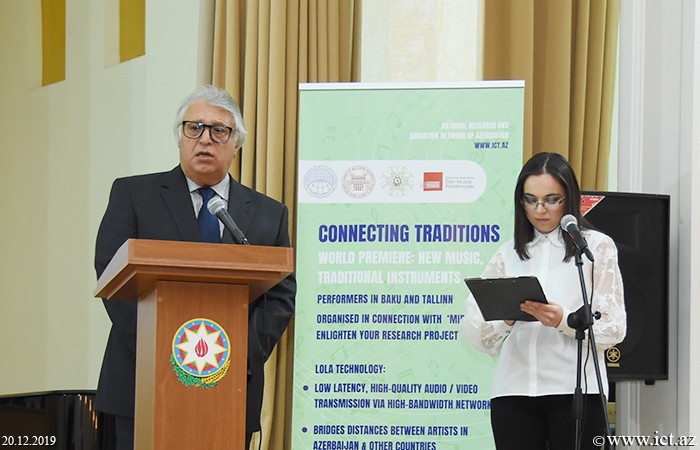 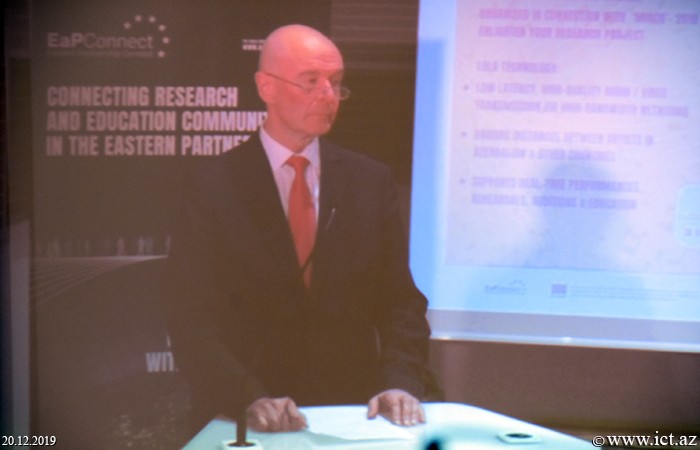 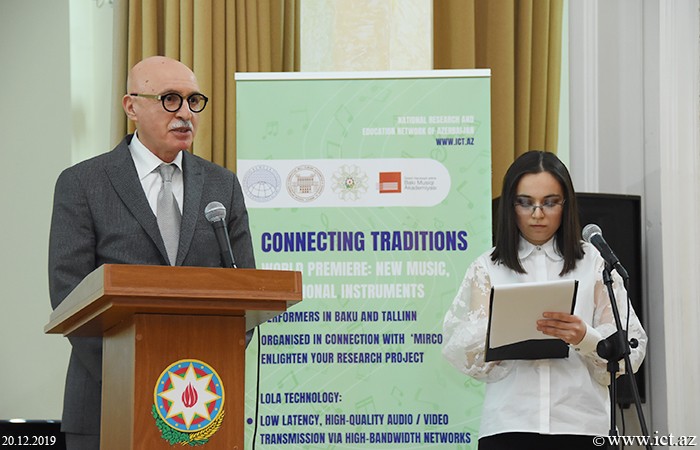 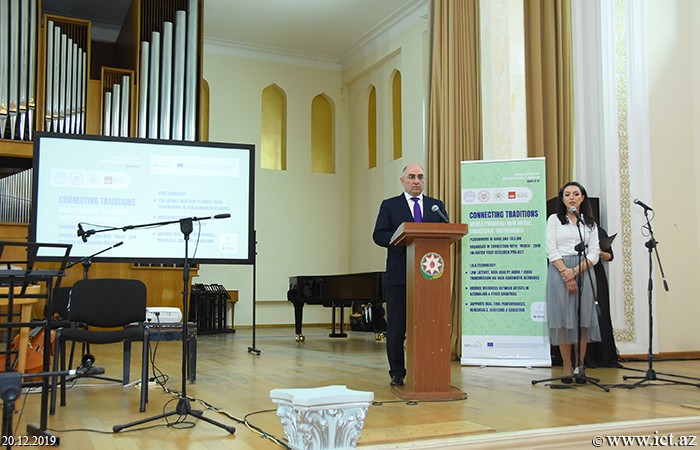 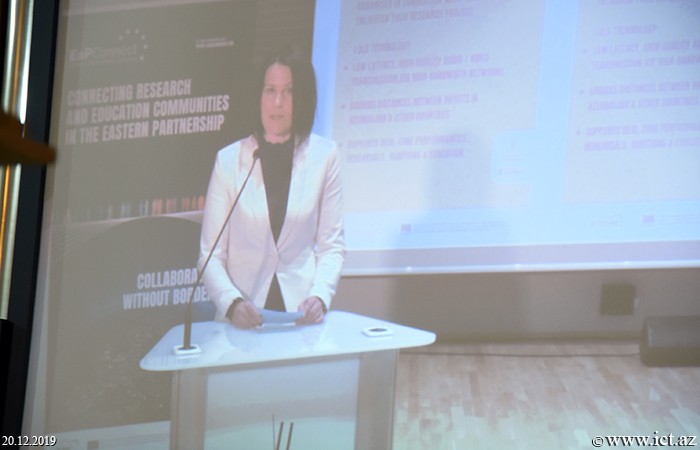 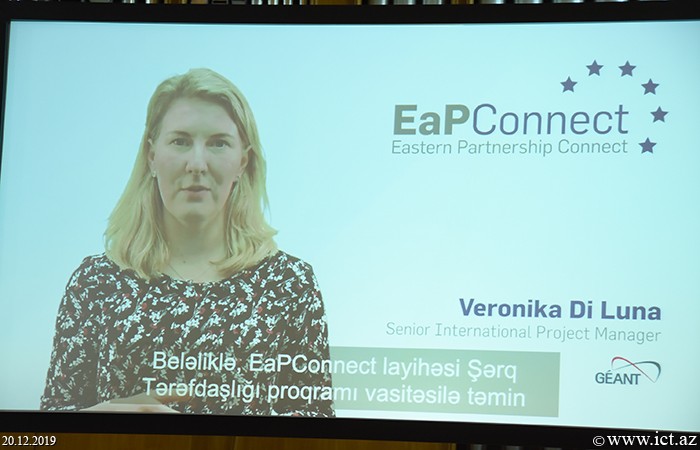 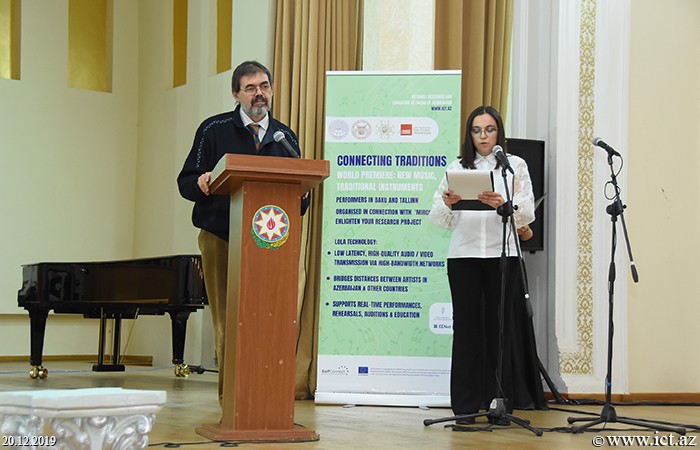 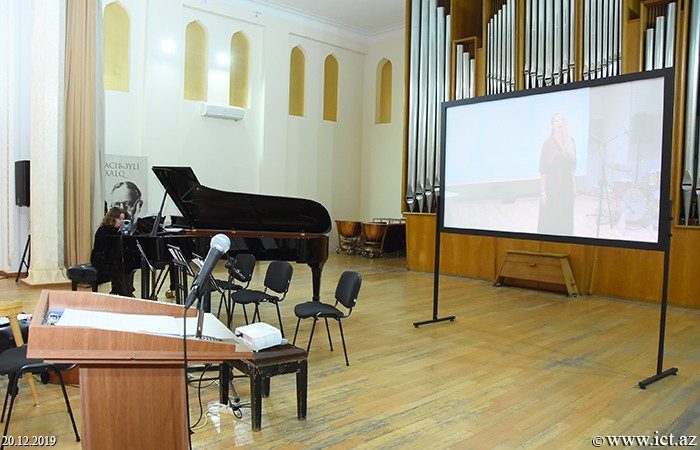 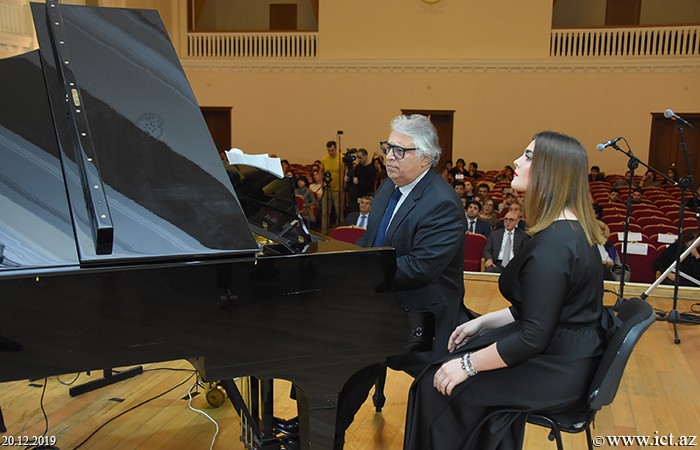 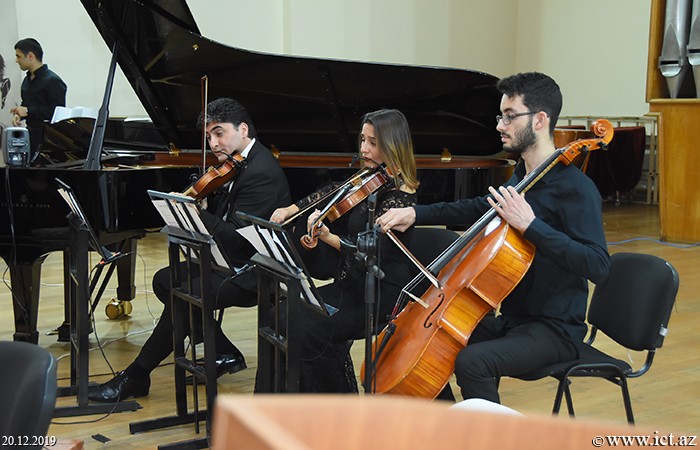 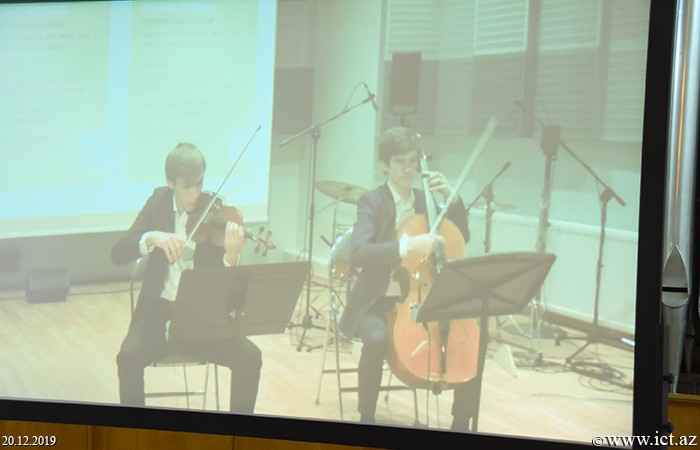 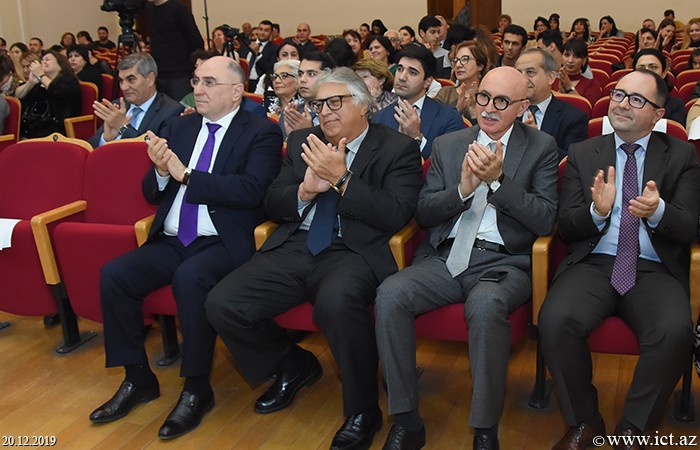 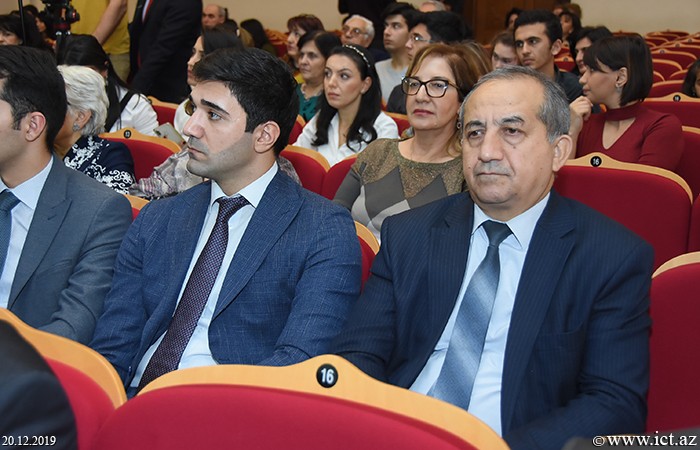 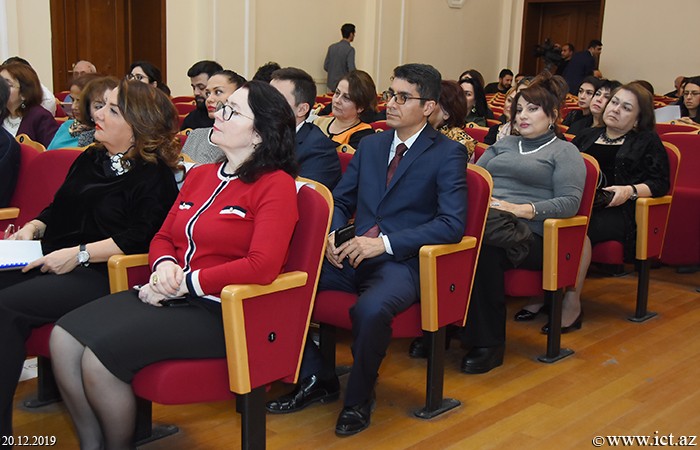 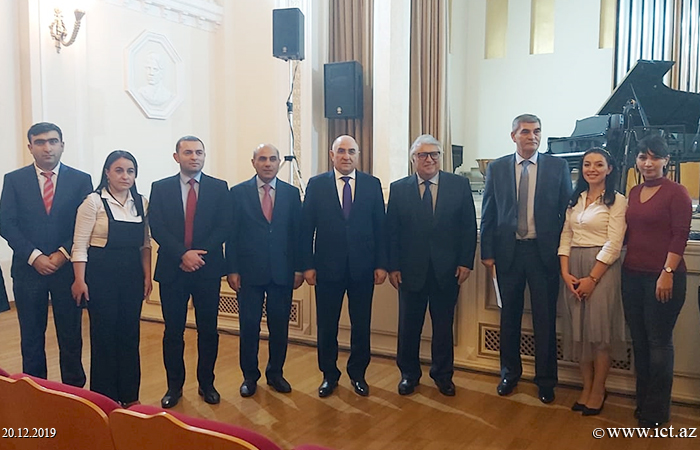 Today, at the Baku Music Academy named after Uzeyir Hajibayli, a LOLA (LOw LAtency - low latency) audiovisual broadcast system has been put into operation with the participation of representatives of GEANT (European Association of Science and Education Networks).

Welcoming the guests, vice-rector for International Relations of BMA,  Yegana Akhundova highlighted the importance of this event. Later, ‘Quando me’n vo’ from La Bohème by Puccini performed by her (piano) with Kadri Kõrvek  (soprano) in Tallinn.

The audience also welcomed by, Rector of BMA Farhad Badalbeyli and he said that the event is of great importance for the science, education and culture of Azerbaijan. The LOLA project aims to provide real-time music shows and connect singers and musicians physically who are far away from each other through online networking services, he noted.  The rector emphasized that this technology permits singers and musicians to attend events in different geographical areas without the need of travel by joining them online. Then, he performed Rachmaninoff’s ‘Vocalise’ in piano and he was accompanied by cellist Henry-David Varema in Tallin.

“The peculiarity of this event is that both music and modern technology are involved. Both are areas of the greatest importance in the world right now," emphasized Deputy Minister of Education Firudin Gurbanov. Noting that AzScienceNet has great potential for integration of science and education in the country, the Minister noted that business cooperation between ANAS and the Ministry of Education is developing in this direction. He said that 18 educational institutions already have access to the AzScienceNet network and its Data Center services of the Institute of Information Technology of ANAS. The Ministry of Education is working to integrate the AzEduNet network into AzScienceNet and the 700 Mbps of proposed 1 Gbit / s of Internet traffic was presented to AzEduNet.

Academician Rasim Alguliyev noted that this meeting is very important for the science and education of Azerbaijan. He noted that one of the main goals of the Eastern Partnership is to establish a broadband Internet network and integrate relevant agencies in the European science and education network, supporting international scientific cooperation of scientists and specialists working in those countries. He also stressed that the Institute actively involved in this process.

According to him, within the framework of EaPConnect project, efforts were made to increase the speed of the Internet to 3Gbps and backups to 1Gbps, and 70% of the speed allocated for educational institutions.

The speaker recalled that in June last year, at a meeting on the role of the GEANT network in the integration of Azerbaijan's science and education into Europe, the implementation of LOLA service was offered at the Baku Academy of Music.

R. Alguliyev noted that after the implementation of the LOLA system at the Academy, a memorandum of cooperation was signed between the Baku Academy of Music and the Estonian Academy of Music and Theatre and countries such as Latvia and Belarus applied to Azerbaijan for joint projects. He noted that the system was developed by the Trieste Conservatory named after Giuseppe Tartini, which cooperates with GARR, Italy's science and research network. He said that the system is currently being connected to over 107 points from more than 30 countries and 80 cities.

The academician noted that in April of this year, the Institute, supported by the AzscienceNet science and education network, with the participation of Estonian representatives, was shown a trial mode of the LOLA audiovisual broadcast system installed at BMA. He said that during the experiments, He said that during the experiments,  an online connection with Estonia via a LOLA based on remote-controlled technology was established and music pieces were performed. “Thanks to EapConnect of GEANT, European Commission and Lola, Europe is in Baku, at the Baku Academy of Music", he added.

Tonight, we are going to witness something unique. A performance that is the synergy of digital technology, cultural heritage technology and creativity, notes Senior International Project manager Veronika Di Luna (GEANT). Thanks to European Union funding provided EapConnect project is able to create this network of like-minded professionals, passionate about the music and collaboration across the border. EaPConnect, an association that has been active for over four years, aims to bridge the digital divide, improve interrelationships across the region, and facilitate the participation of local scholars, students and scholars in global research and education.  It is really exciting to see how digital technologies can bridge the gap, bridge the collaboration between Azerbaijan and the European Union, she noted.

We launched the Lola technology in Estonia in October 2017 and hosted a similar event named “music without borders”, notes Ivari Ilja, the rector of Estonian Music Academy and Theatre. Since then, technology has helped us to develop our international network, in fact, on several occasions we have used the technology with prestigious international institutions. It is our wish to continue our long-distance collaboration with the Baku Academy of Music on implementation every-day activities such as lectures and masterclasses.

Tonight, we are here to enjoy an event where we show there is no border between human knowledge disciplines, between art and science and technology, Director of the infrastructure of Estonian National Research and Education Network (EENet of HITSA) Kristina Lillemets noted. As a matter of fact, there is nothing new if we state that music is a very pleasant way to enjoy the laws of physics (because, in the end, music is just all waves), and to recognize that many scientists and technologists are also good musicians or enthusiastic lovers of this form of art.

In 2005, musicians came to technologists, computer scientists, and computer network people asking them to make one of their dreams come true, it was easy from the beginning to talk, think and create what is now called "Lola - the low latency audiovisual streaming system".

Paolo Girol gave brief information about project Mirco and noted that the project meets essential EU policies such as digitalization, preservation of heritage and digital mobility. "This technology allows musicians and composers to give online masterclasses about their national instruments and to meet and practice together over the network", he added.

"Tonight we are here to enjoy an event where we show there is no border between human knowledge disciplines, between art and science and technology. As a matter of fact, there is nothing new if we state that music is a very pleasant way to enjoy the laws of physics (because, in the end, music is just all waves), and to recognize that many scientists and technologists are also good musicians, or enthusiastic lovers of this form of art", Coordinator on Advanced Application Services Cladiou Allachio (GARR).

A piece dedicated to Lola “Mystic” by Azerbaijanian young composer Ilaha Qismat intended for the traditional instrument of Azerbaijan and Estonia (tar and kannel) performed by Ibrahim Aghayev and Kristi Mühling in Baku was introduced.

The concert concluded with a jazz performance by performers in Baku and Tallinn and a reception followed.

Demonstrating no boundaries between knowledge, art, science and technology, LOLA connects sound and video through devices, making people closer to each other.

“Connecting Traditions” concert was held within the EU-funded EapConnect project of GEANT in Baku, Azerbaijan. The technical support is provided by AzScienceNet Research and Education Network of Azerbaijan via AzEduNet network at the Baku Academy of Music and EENet Research and Education Network, at the Estonian Academy of Music and Theatre and GARR in Italy.