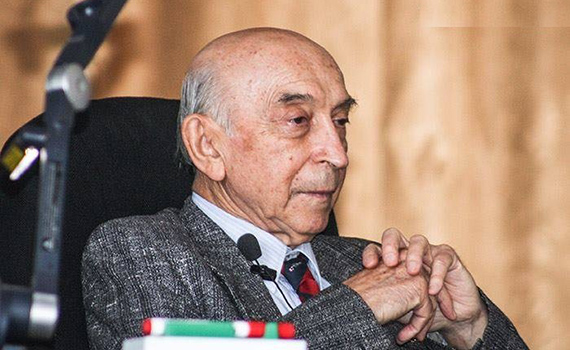 Today is two years since the death of the world-renowned Azerbaijani scientist, Professor Lotfi Zade of California University, founder of fuzzy set theory and fuzzy logic.

Lotfi Asker Zadeh was born on Feb. 4, 1921, in Baku, Azerbaijan. In 1931, his family moved to Tehran in Iran. Zadeh was enrolled in Alborz College. After high school, he sat for the national university exams and placed second in the entire country. In 1942, he was graduated from the University of Tehran in electrical engineering. After graduating he went on to the Massachusetts Institute of Technology; then to Columbia; then to the Institute for Advanced Study, in Princeton, New Jersey; and, finally, in 1959, to the University of California, Berkeley, where he remained for the rest of his career. He became Chair in 1963, and later in the Computer Science Division (EECS).

The introduction of fuzzy measure in science has made it possible for a more adequate account of the uncertainty of processes taking place in nature and in society. Japanese companies such as Mitsubishi, Toshiba, Sony, Canon, Sanyo, Nissan, Honda, and other influential companies produce photo and video cameras, washing machines, vacuum chemical cleaners, cars, trains,with fuzzy logic technology in industrial processes. He is also the author of scientific discoveries that  played an important role in the development of world science such as "Theory of Thoughts", "Theory of Systems", "Theoretical Computer Theory" and "Theory of Optimal Filters". He has written books about "The Coryphaeus of Modern Science", "The World Can not Live Without Genius", "Far & Near Lutfi Zadeh" documentary, Lutfi Zadeh's Legacy and Artificial Intelligence Association, International Academy of Modern Sciences named after Lutfi Zadeh.

His famous theory of the space of states and the theory of control and observation of dynamic systems forms the basis of modern management science. The US National Space Research Center (NASA) investigates, designs and applies control systems based on these theories.

The last time the world-famous scientist arrived in Baku in November 2008 to participate in the international exhibition and conference of telecommunications and information technologies "BakuTel". L.Zadeh also took part in the event organized in the Presidium of ANAS, in which he was awarded the Honorary Diploma of ANAS for merits in science.

Let us note that in 1989, for successes in the theory of fuzzy logic in industry, L.Zadeh was awarded the highest Japanese award "Honda", which is awarded to Japanese scientists.

Lutfi Zadeh is the only person elected as a lifelong professor at the University of Berkeley.

He was a leading NASA and NATO specialist. He also headed the Institute of Information Technology "İnstitute Zadeh-ZİFT" in the city of Berkeley, in which he lived. For information, we will inform you that Lutfi Zadeh was the second scientist in the world after the German scientist Max Planck, whose name and the name of the theory, during his lifetime, had a scientific center.

L.Zadeh was a member of many foreign academies. He was awarded awards and medals of numerous honorary societies and foundations. He was an honorary doctor of public organizations and foreign countries. The world famous scientist was also elected a member and honorary academician of the National Engineering Academy of the United States, the Russian Academy of Natural Sciences.

It should be noted that the scientist's body, according to his will, was brought to Azerbaijan, and he was buried in the First Alley of Honorary Burial. On the eve of the anniversary of the death of an outstanding scientist, a tombstone was erected on his grave, prepared by the national artist, academician Omar Eldarov.