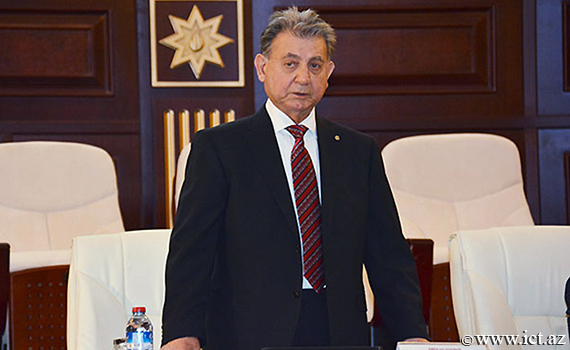 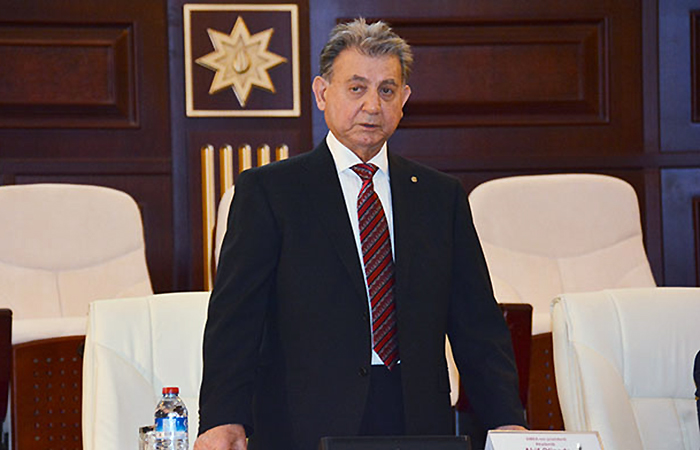 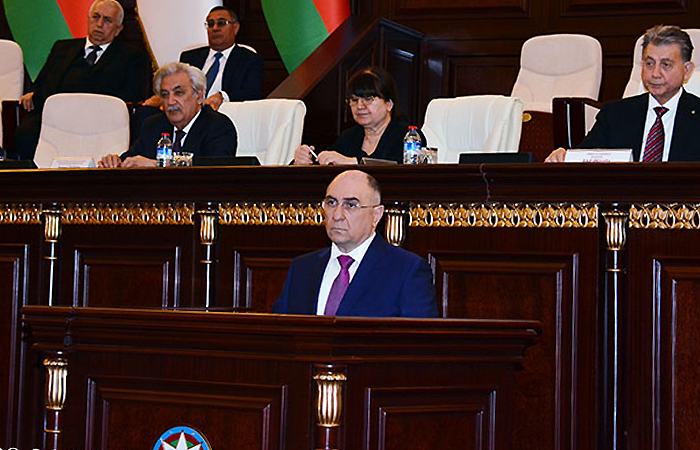 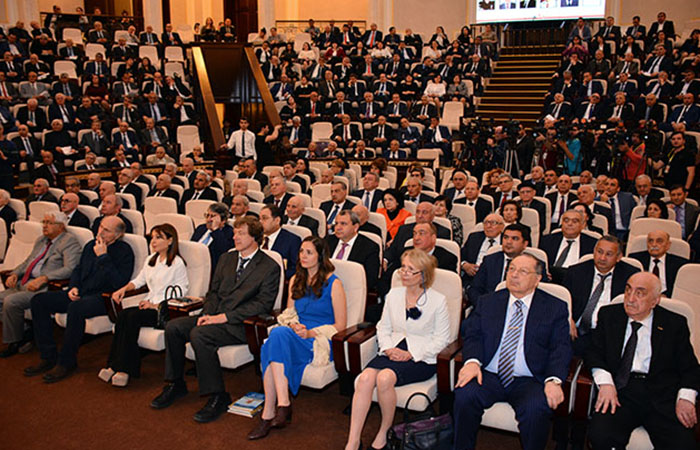 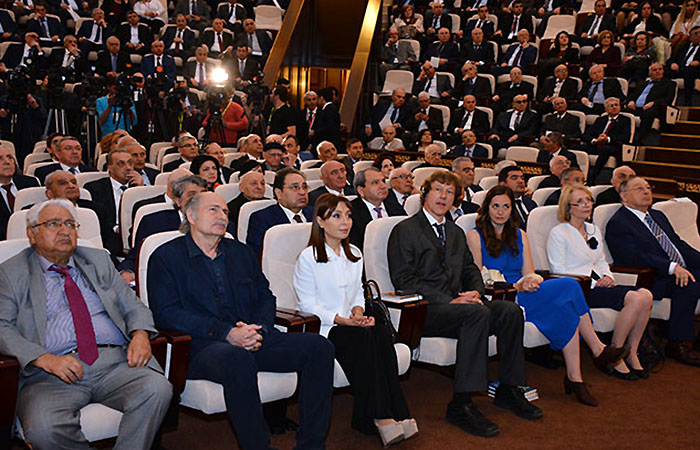 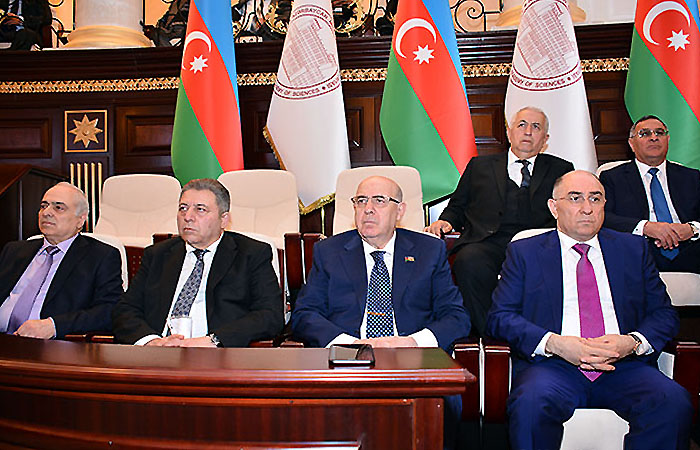 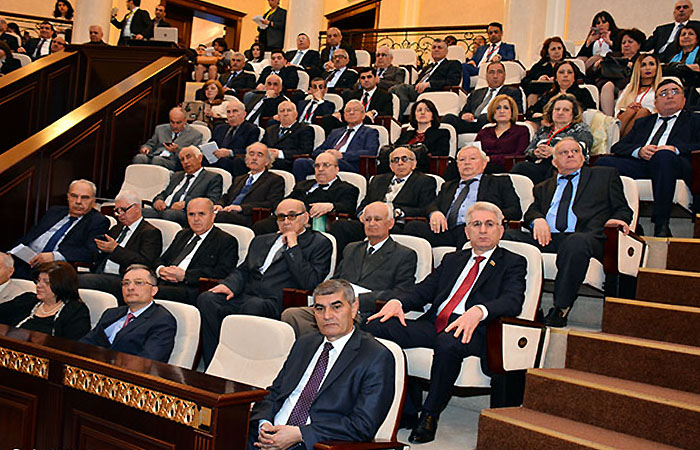 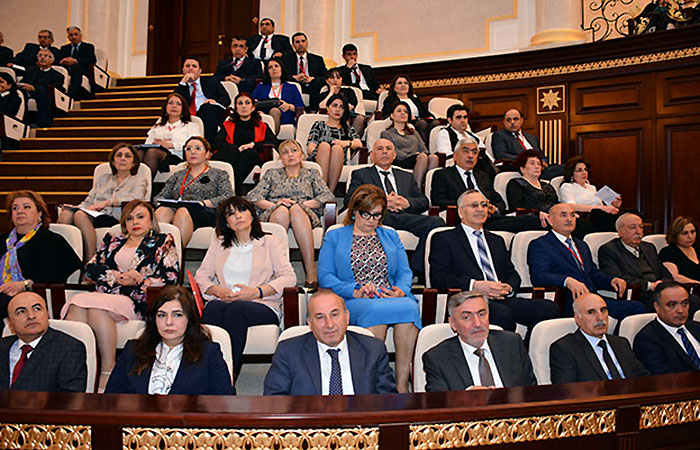 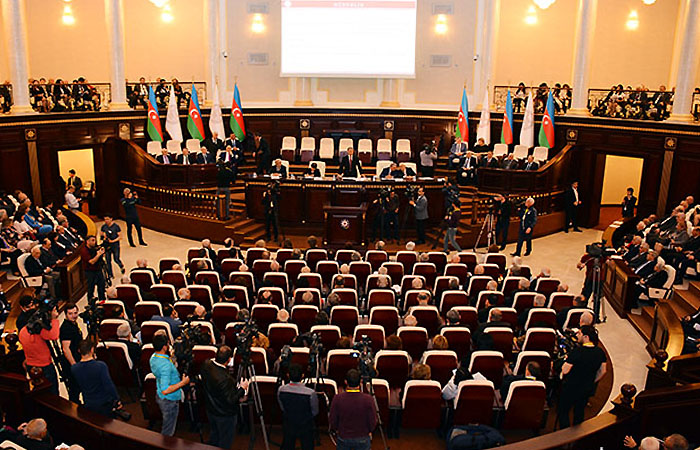 At the meeting academician-secretary of ANAS, director of the Institute of Information Technology, academician Rasim Aliguliyev answered questions about future development prospects in the integration of science and education, development of e-science, the role of our scientists in the formation of knowledge society and other issues.

On 28th of April Annual general meeting devoted to the scientific and scientific-organizational activity of Presidium of ANAS for 2016 was held.

Opening an event Akif Alizadeh gave detailed information about scientific and scientific-organizational activities of Academy for 2016.

Noting that, last year was remembered by important scientific achievements and successes, Academician Akif Alizadeh said that important state measures aimed at developing the non-oil sector were carried out; social projects that are one of the main priorities of state policy in the country were successfully continued.

Recalling that in the reporting year, due to the 25th anniversary of the restoration of state independence, publication reflecting scientific achievements was published in the Academy, President of ANAS especially noted the book "Towards Independence-25", published under the general editorship of Academician Ramiz Mehdiyev. He said that, publication covered the responsible and fruitful path that had been passed, as well as important achievements in various sectors of public life.

Speaking about the measures taken to increase the international authority of Azerbaijan, Academician spoke about the activity of the Scientific Center of Azerbaijan Studies and Caucasus Studies created by the Oxford University after Nizami Ganjavi, whose leader from the Azerbaijani side is ANAS Corresponding Member Nargiz Pashayeva. He noted that, Center conducts important works aimed at promoting the national science and culture on an international scale.

Academician said that, the V Baku Humanitarian Forum, which was held in 2016, was attended by outstanding figures of world science, Nobel Prize winners, domestic scientists had the opportunity of future cooperation with them.

Recalling that, last year the presidential decree was announced in the republic as the "Year of Multiculturalism", Academician Akif Alizadeh told about the activities carried out in connection with this: "At the events that were carried out in connection with the "Year of Multiculturalism"our scientists took an active part, especially our colleagues engaged in humanitarian scientific fields. The corresponding decision of the Presidium of ANAS approved the Plan of measures aimed at preserving, even more developing and wide propaganda of the traditions of multiculturalism in Azerbaijan. In accordance with the plan, last year scientific and organizational activities dedicated to multiculturalism were implemented. New organizations have been created in ANAS, whose activities will be aimed at studying the relevant issues".

Academician Akif Alizadeh said that, by approving the Law "On Science" in 2016, the regulatory and legal framework in the scientific sphere was improved. He noted that, according to the Law, the Academy was awarded the status of the highest scientific body of the republic, which organizes and provides the development of science in Azerbaijan, implements the scientific and scientific and technical policy of the state, coordinates and directs scientific research in the country, represents the republic in foreign countries in the field of scientific and technical activities. The document also reflects such important issues as granting the undergraduates and doctoral candidates the right to defer from conscription to military service, accreditation and coordination of scientific activities, etc.

Last year the Presidium of ANAS worked out the project "Doctrine of the development of science in Azerbaijan", corresponding to the requirements of the Law "On Science", as well as calls of modern times; He was widely discussed at a meeting of the Republican Council for the Coordination of Scientific Research. This project, which defines the basic principles of state policy and strategy in the scientific sphere, was presented to the head of state for approval.

Academician Akif Alizadeh reported that, in general, in the reporting year, ANAS took an active part in the implementation of 23 programs of national importance.

Positively assessing the last year's activity of ANAS in the field of science and education integration, Academician Akif Alizadeh said that, important measures were implemented aimed at improving the training system in accordance with modern standards, applying research results in the learning process. Having said that, the number of specialties and places in the Master's program of ANAS for 2016/2017 academic year was increased, Academician noted that, 56 people entered to the Master's program in 18 specialties. Academician stressed that, in 2016 was approved a joint scientific session of the General Meeting of ANAS and the Board of the Ministry of Education was held, a Plan of joint actions for the integration of science and education.

Touching upon international scientific ties, President of ANAS said that, in the reporting year, international cooperation was significantly expanded, negotiations were held with a number of authoritative foreign organizations in the field of studying global problems and applying scientific achievements, and fruitful contacts were established.

Having said that last year an agreement on cooperation was signed between ANAS and "Thomson Reuters" organization, Academician Akif Alizadeh stressed that, scientists and specialists of scientific institutions of ANAS had an opportunity to use the bibliometric database ("Web of Science") of "Thomson Reuters" platform.

Speaking about the state of electronic science, the academician said that the Center for Scientific Computer Network AzScienceNet for the provision of Internet services was established at ANAS; The network provides the integration of scientific institutions in the space of scientific and educational networks in Europe, the establishment of links with relevant international organizations, the use of electronic resources of authoritative world scientific databases, as well as the exchange of voluminous information through the Internet, thereby fulfilling the function of a national operator for scientific and educational networks.

The head of ANAS also talked about a number of successful events implemented in 2016 in the field of popularization of science. He noted that, in the conditions of the knowledge economy with the purpose of discussing were established innovative projects, the prospects of their application, the popularization of innovations in the field of various sciences and technologies and the increase of public interest in science on Azerbaijan State Television, "Science and Innovation" program. Academician Akif Alizadeh said that, important events that were carried out in the reporting year in this direction are the Second Azerbaijan Science Festival and the establishment of the House of Scientists.

Having said that, in 2016 by the decree of the head of state in ANAS a High-Tech Park was created, Academician added that work is continuing on the formation of the Park and organization of its material and technical base.

ANAS President stressed that, in order to deepen the integration between science and production in the reporting year, in all spheres of activity of the Experimental-Testing Plant, a fundamental turn was made, important scientific and research work began to be implemented. The measures implemented at the plant created the conditions for the development of new technological processes on an experimental scale, the production and sale of petrochemical, chemical and technical products.

In conclusion of his speech, head of ANAS stressed that, the domestic science faces a number of tasks. He noted that the scientific potential, based on the knowledge economy and high technologies, should be further strengthened, the more active participation of the scientific potential of domestic scientists in the development of the state should be ensured. Academician Akif Alizadeh expressed his confidence that ANAS will successfully cope with these tasks.

In the event, questions about existing problems in the development of  national database for evaluation of scientific activity, formation of the knowledge economy, future development prospects in science and education integration, strengthening  of material-technical base of scientific institutions  of ANAS,  development of e-science, the scientist's role in the formation of  knowledge society and other issues were answered by academician-secretary of ANAS, director of the Institute of Information Technology of ANAS, Professor  Rasim Aliguliyev.