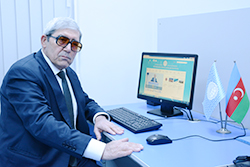 In 1973 he graduated from “Automation and telemechanics” faculty of Polytechnic University named after C.Ildirim.

He worked as technician, engineer, sector manager, project chief engineer. Since 1995 he has been working at the institute as a head of department.

In 2011, he defended his thesis on "Development of Methods and Algorithms for the Synthesis of Distributed Processing of Audioinformation" on the specialty 05.13.01 - "System Analysis, Management and Information Processing" and received the name of the PhD in engineering., engineer, sector manager, chief engineer of the project.

In 2015 he was awarded with the Honorary Decree of the Department of Physics, Mathematics and Technical Sciences of ANAS for his long-term scientific and scientific-organizational activity.

The main scientific and practical results achieved are:

For the first time in our Republic with his leadership:

-Organic luminophorus and adsorber coding properties were investigated and technology for the production of luminophoric coatings with special optical conductivity based on the results obtained was developed. Principles of architectural-schematic construction of token identification systems were developed  and implemented (Baku Metro);

-The principles of architectural-technological development of automated control systems of passenger automation devices have been worked out, and some of these principles have been designed, developed and implemented (Baku Metro);

-The analysis and processing principles of voice signals transmitted by various types of communication channels were studied. Methods and algorithms for evaluating quality indicators received from transmission channels were developed and implemented (Aztelekom PU and etc.);

-The principles of architectural-technological development of digital recording and recording of audiovisual audio data systems were developed and the devices developed on these principles were applied to archive operator-client talks and screen files in centralized dispatching systems (Baku Metro) and Call-centers ("Aztelekom" PU and so on.).

Currently, he  researches the following scientific and technical problems:

-Formation of audio and video services environment on G2G, G2B and G2C models within the State Program on Development of Communication and Information Technologies in Azerbaijan (Electronic Azerbaijan);

-Development of the concept and principles of electronic waste management in Azerbaijan.

Currently he is the head of department in ANAS Institute of Information Technology.