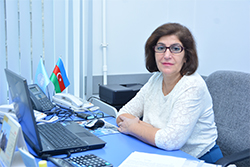 Guliyeva Leyla Habib was born in 1957.

In 1979, she graduated from the faculty “Automation of production processes”, Azerbaijan Oil and Chemistry Institute after M.Azizbayov with honorary diploma. In 1979, she began her career as an engineer in the department of Automatic Control Systems (ACS), the Institute of Cybernetics of ANAS.

In 1982-1995 she worked as a senior engineer-projector in the department of ACS, the Academy of Sciences.

In 2000 she entered the faculty “Finance and credit”, Azerbaijan State Economic University, and graduated from the qualification course on the specialty "Finance and Credit" in 2002.

Since 1996 she has worked as a chief accountant.