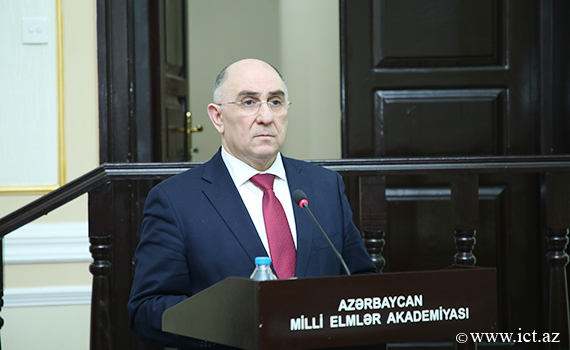 On January 15, 2020, azedu.az portal has published a number of news on issues discussed at the meeting of the Presidium of the National Academy of Sciences of Azerbaijan on January 15, 2020. One of those messages - "The vice-president of ANAS condemned ministries. They do not benefit from our potential" and it was referred to me. The dissemination of news in such a title and content worried me a lot.

“In this regard, I would like to state that a number of facts and information were distorted in the news. The annual report on the scientific and organizational activity of the Division of Physical and Mathematical and Technical Sciences for 2019, covering 7 scientific institutions of ANAS, was delivered by me. The report addresses the functions of division's scientific institutions in the implementation of public policy, the status of the human resources, scientific-theoretical, scientific-practical, scientific-innovative, scientific-organizational condition, important scientific results, published scientific works, international cooperation, training of scientific personnel, integration of science and education, promotion and popularization of science, the state of e-science and other issues were widely discussed. At the same time, the sides exchanged views on the existing problems and upcoming tasks and put forward various proposals.  It was noted that 480 scientific articles published in the Web of Science of ANAS in 2019 fall into division's share.  This is approximately 36% of articles published in Web of Science in this country and 70% in ANAS.

In addition to participating in a number of international projects, the division's scientific institutions work closely with the European Center for Nuclear Research (Switzerland, Geneva) and the United Nuclear Research Institute (Dubna, Russian Federation). The scientific institutions of the department are closely involved in the implementation of 9 different state programs approved by the President of the Republic, Mr. Ilham Aliyev.

At the meeting, where these and other issues were discussed, the problems and shortcomings of the Academy in the field of physical and mathematical and technical sciences were voiced and proposals for their solution were made.

I think it would be more appropriate for the azedu.az portal, who is responsible for promoting science and education, to provide news and information about the ideas and suggestions mentioned above to the general public. Unfortunately, the reporter of the portal chose not to convey the essence of issues, but to create a cheap sensation. Some of the points mentioned have been misrepresented to the public by removing the context and distorting its content.  Without going into details, I would like to clarify the news published on the portal regarding that meeting.

One of the questions addressed to me as part of the discussion of the report was related to the practical application of the results of the division's scientific institutions and the amount of extra-budgetary funding. I answered that in the scientific institutions of the department, the situation is not encouraging. Thus, 19 projects have been implemented over the past year, and extra-budgetary funds have been received at the Institute of Information Technology, was about 150,000, and other institutions - 10,000, 15,000, 20,000.  Of course, these figures are very small, and efforts in this direction need to be strengthened. Cooperation with relevant government agencies and ministries should be expanded. The need for science of these agencies should be determined, should be put before the scientific institutions as a task, in addition to theoretical studies, special attention should be paid to the application. The ministries have to fulfill their demands with the participation of foreign agencies, due to the weak activity in this area.

At present, in accordance with the call of the leadership of ANAS, great attention is paid to applied research, work on the extraction of extra-budgetary funds, and activities in this area are built on innovative bases. The analysis shows that there are objective and subjective reasons for problems in this area. In general, the volume of extra-budgetary funds received by the Academy of Sciences is not satisfactory. To improve the situation in this area, the scientific institutions of ANAS should reconsider their scientific priorities, identify scientific problems and priorities in accordance with the requirements of different sectors of the Azerbaijani economy, for example, make more efficient proposals for agriculture, oil industry and other sectors. At the same time, our scientists have to adapt to the conditions of the modern market economy and possess innovative thinking to commercialize their knowledge. In this case, the relationship between the ANAS and the ministries and other agencies will be intensified and the number of extra-budgetary funds will increase significantly. This can give rise to scientists' salaries and encourage young people to come to science.

The aforementioned ideas are based on the shorthand of the meeting of the Presidium of the National Academy of Sciences of Azerbaijan dated January 15, 2020. "I am kindly asking  azedu.az  to eliminate the distortions  ("The vice-president of ANAS condemned ministries. They do not benefit from our potential")  in the news and to disseminate this refutation in order to give the public the right information. ”