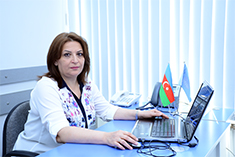 Tamilla Adil Bayramova was born in Baku on 6 April, 1966. She graduated from “Automation and Computer Engineering” faculty of  the Azerbaijan Technical University named after Ch.Ildirim with honour degree.

In 1988 she was hired as a researcher by appointment in the Department of Automatic Control Systems of Azerbaijan National Academy of Sciences.

She was participated in the creation of Azerbaijani center of International INTERNET network and internet services to users and in the creation of www.science.gov .az portal of ANAS. She conducted research on the scientific-theoretical bases of software engineering, software quality indicators, standards, verification and validation methods.

She is a PhD student of the institute since 2015.She was working on her disseertation “Developing methods and algorithms for the improwing reliability of software”.

Since 2012 she is conducting training on the subject “Informatics" in the Baku branch of Moscow State University named after M.Lomonosov.

She worked at the Training- Innovation Center of the Institute.

Currently she works as a chief of sector at the Institute.