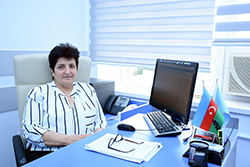 In 1978, she graduated from Baku finance and credit technical school and at the same year she commenced her professional career as a laboratory assistant at the Automated Control Systems Department under the Institute of Cybernetics of Azerbaijan National Academy of Sciences.

In 1979 she entered the “Automation of production processes” faculty of Azerbaijan Institute of Petroleum and Chemistry named after M.Azizbeyov, which she graduated from in 1985. In the same year, she continued her activity as a part-programming engineer. She worked at the post of senior and leading engineer, also actively participated in software development of projects such as “Electronic document management”, “Electronic Archive”, “Execution control tracking system”.In 2002-2011 she worked as a chief of the sector at the ANAS Institute of Information Technologies. Since 2011 she is a project chief engineer. She teaches at the Training Innovation Center of the institute.

She conducted research on “Developing e-document intelligent processing and management system in the framework of e-government” in the direction of "Developing intelligent corporate network (CN) and systems" defended the thesis on the “Development of models and algorithms for intelligent management of text document in e-government” in the specialty 3338.01 - System analysis, control and information processing at the Institute of Information Technology of Azerbaijan National Academy of Sciences and received Ph.D. in Technical sciences in 2013.

Currently, she conducts research on the "Big data", and is actively involved in the development of the "e-Science" software project under the "E-Azerbaijan" program.

She is the author of more than 100 papers. More than 35 of her works were published abroad, and several were published in international journals with high impact factor.

1. Architectural principles of the electronic document processing and circulation system within the e-state, a conceptual model for the system's intellectualization, and an electronic model based on improved electronic signatures were proposed.

2. Models formulated as mathematical programming problems for automatic classification and interpretation of text documents are offered.

3. Modified binary options algorithms based on differential evolution and "herd" intelligence have been developed to solve optimization problems.

4. Big data technologies have been explored in relation to the problem of acquiring knowledge from large-scale databases.

5. A conceptual architectural model was proposed for the integration of large-scale data.

7. A deep learning model based on CNN and LSTM artificial neural networks has been developed for sentiment analysis of social network data.

8. Models for the analysis of oil data based on machine learning have been developed.

9. The scientific-theoretical problems of in-depth training are investigated.

In 2016, she was awarded the title of Associate Professor by the Higher Attestation Commission under the President of the Republic of Azerbaijan.