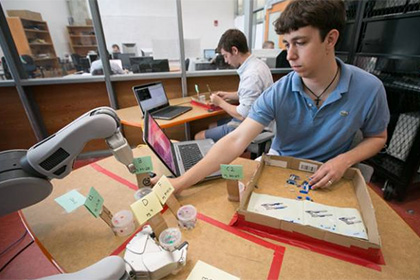 Research coming out of MIT confirms that in a two-human, one-robot team working toward a common goal, the humans would rather the robot be in charge.

Not only do human participants prefer taking robo-orders when it comes to tackling a manufacturing task, but the robot ended up leading the team in a more productive manner than the humans could. From MIT:

The fully-autonomous condition proved to be not only the most effective for the task, but also the method preferred by human workers. The workers were more likely to say that the robots “better understood them” and “improved the efficiency of the team.”

[Project lead Matthew] Gombolay emphasizes that giving robots control doesn’t mean a team of cyborgs will be running the show. It means the tasks are delegated, scheduled, and coordinated via a human-generated algorithm.

This experiment was conducted in two other arrangements as well — manual, in which all tasks were coordinated by a human, and semi-autonomous, in which one human worked delegated its own work and the robot delegated tasks to the other human.

You can see how the various setups compare against each other in the data below. The team's two hypotheses are confirmed: that the level of automation in a system greatly affects efficiency, and that people want to be involved without the burdens of small management decisions.