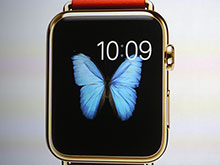 Yahoo is setting its sights on the growth of wearables and other mobile devices as the internet star of the last dotcom boom tries to transform itself into a world of apps.

Adam Cahan, senior vice-president of mobile, said wearable devices such as the Apple Watch present a big opportunity for Yahoo next year, both as new homes for existing apps and to create new user experiences.

Mr Cahan said he expected Yahoo and the wider industry to benefit from “huge amounts of future growth”, including an acceleration in the adoption of mobile devices including wearable and the so-called internet of things, where ordinary household appliances are hooked up to the internet.