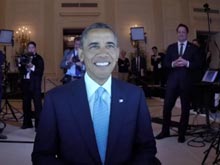 The White House teamed up with the Smithsonian to make an exact 3D replica of President Barack Obama.

A video released by the White House on Tuesday showed Smithsonian staffers using scanners, cameras, and computer programs to obtain measurements that were used to make a 3D-printed bust of President Barack Obama.

Here is the video.