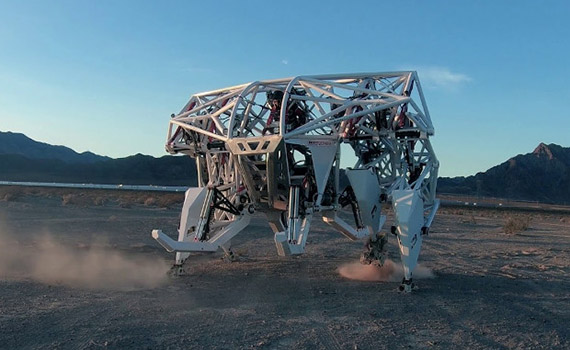 The Guinness Book of Records has registered the four-legged Prosthesis exoskeleton as the largest such device in the world. The exoskeleton, developed by the Canadian company Furrion and its founder Jonathan Tippet, has a height of 3.96 meters, a length of 5.1 meters and a width of 5.51 meters, registered in the book of records.

An exoskeleton is a device designed to make up for the lost functions of the human body or significantly expand existing ones. For example, with the help of industrial exoskeletons, people can move large objects or perform monotonous hard work without harming the musculoskeletal system.

The Prosthesis exoskeleton was created specifically for the creation and development of races on similar devices (although other racing exoskeletons do not yet exist). Tippet has been developing Prosthesis for the past 13 years. The device was first introduced in 2018. Then its height was declared at 4.57 meters. It was claimed that the exoskeleton is capable of speeds up to 32 kilometers per hour.

According to the Guinness Book of Records, the mass of the exoskeleton is 1.6 tons. Prosthesis is constructed from chrome tubes. The exoskeleton is driven by two electric motors through a hydraulic system with a force of 53.4 kilonewton. A 96-volt lithium-ion battery with a capacity of 36 kilowatt-hours is responsible for powering the electric motors.

According to onauke.info, in December last year, the American company Sarcos Robotics introduced the serial version of the industrial exoskeleton Guardian XO. This device allows a person to lift a load weighing 90 kilograms with almost no effort. New exoskeletons are planned to be rented for 100 thousand dollars a year.