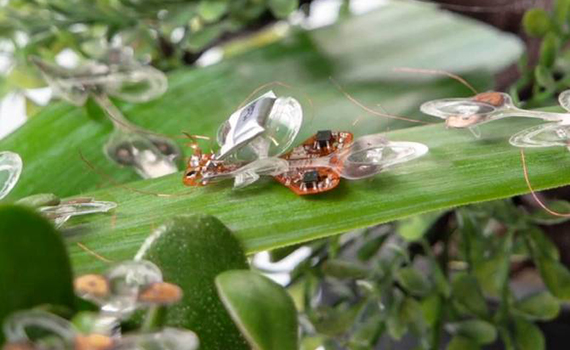 Lightweight, flexible and durable mini-robot, developed by scientists from the Federal Polytechnic School of Lausanne, as well as their colleagues from France, looks like a small bug or butterfly. Such robots, as Science Robotics writes, will be able to unite in "flocks", with the help of which it will be possible to carry out some work or study the behavior of insects.

A robot called DEANsect can travel three centimeters per second. The miniature machine exists in two versions - the first receives the necessary electrical energy through an ultra-thin wire, and the second is equipped with a built-in power source. A robotic beetle can recognize light sources, move along surfaces of various types, and also follow a drawn line.

Flexibility and the ability to move quickly on different surfaces is the result of using an elastomer, the thickness of which is comparable to the thickness of a human hair. The robot moves thanks to vibration, the frequency of which is 400 vibrations per second. The elastomer was made so thin using nanotechnology. They were also used the creation of electrodes whose thickness does not exceed a few molecules, "say Swiss scientists.

According planet-today.ru, flocks of "smart" insect robots, consisting of miniature "bugs", will be able to carry out repair work, plus small robots can be sent to insect colonies to observe them. The development, as noted by its authors, as a whole has a fairly wide potential for practical application.