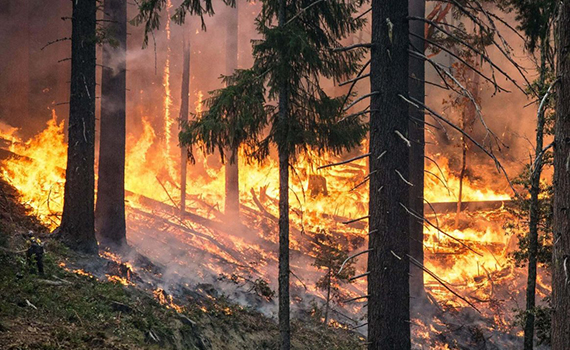 US authorities have launched a project to automatically search for potential forest fires using AI. So they want to accelerate the transfer of information to rescue services and firefighters, as well as increase the accuracy of determining the location of the fire to 94%.

The US National Guard Air Force is an agency that is also responsible for the operational determination of forest fires. For many years, it relied on a team of analysts who sometimes work around the clock to process aerial photographs of forests and find potential sources of fire. Now, CA ANGs began to analyze images using AI to detect forest fires faster.

The tool is inspired by artificial intelligence systems designed to analyze medical images - for example, determining the location of a tumor and the beginning of healthy tissue during scanning. But in this case, the team of researchers trained their model on thousands of frames from videos of forest fires. The resulting system can determine the boundaries of the fire on infrared images of a burning forest.

“The AI detects fires much faster than the current staff, who first views the video, compares it with the map, and then reports this to the operational services,” said Devaki Raj of CrowdAI, the company that created the automated system called FireNet.

“Imagine saving time between automatically completing this task at a speed of 20 frames per second, accuracy of 92%, and updating maps manually,” she added.