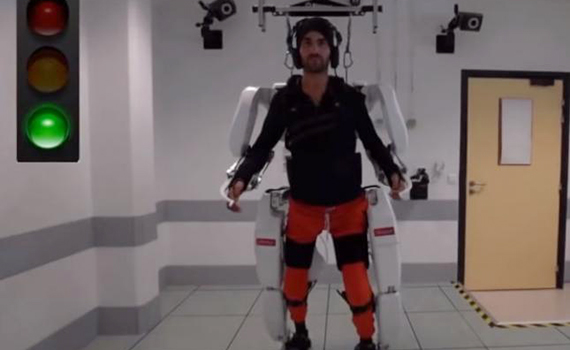 French scientists from the University of Grenoble-Alpes were able to develop an exoskeleton and a neurocomputer interface, which made it possible for a completely paralyzed patient to walk 145 meters in 480 steps. The main work of specialists was carried out in the direction of the neural interface, since there are a lot of varieties of exoskeletons, and they work well.

Scientists have achieved that the exoskeleton hardware began to interact with the neural interface, i.e. managed to learn how to interpret the electrical signals of the brain in the movement of mechanical "muscles". Of course, there are difficulties, this is not an exoskeleton from films with future technologies.

The exoskeleton allows a paralyzed person to control four “limbs”. In order to implement the plan, scientists used two sensory modules mounted on the right and left halves of the head. They are connected to electrodes that are located under the cranium.

Each module is connected to 64 electrodes. And the electrical signals that are generated by the brain are recorded and processed by a PC or exoskeleton computer system.