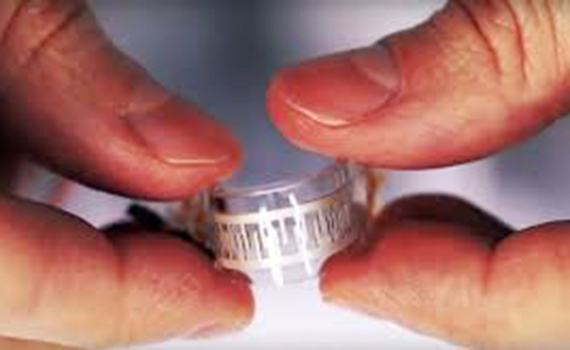 A group of Japanese and Swiss engineers led by Herbert Shi of the Lausanne Federal Polytechnic School developed a pump for soft robots that does not use hard components at all.

Now almost all robots come from hard components. At the same time, in robotics there is a separate direction in which engineers are looking for possible alternatives for the materials from which robots are made.

Rigid robots can rarely be safely used to work with humans, and their design makes the devices unstable to deformation.

The pump for soft robots consists of two layers, inside of which there is a channel for liquid. On the sides of the channel are electrodes with protrusions of a special shape.

The device works due to the fact that when the voltage from the electrodes begin to emit electrons, which ionize some particles of the liquid. After that, they receive a negative charge and can move under the influence of an electric field in the necessary direction.

Now, in addition to the electric soft pump, soft logistic schemes, a ring generator and valves already exist. There are even tiny soft robots, but they are so far practically useless in practice.