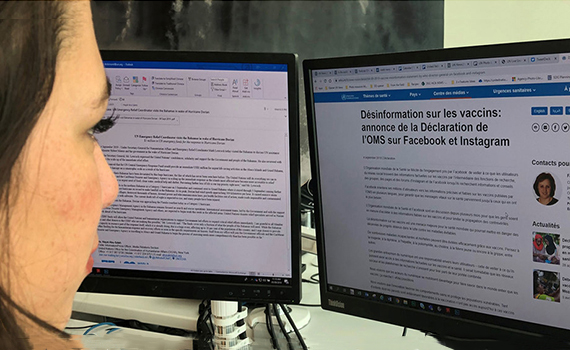 The World Health Organization (WHO) welcomed the decision of the Facebook social network management to do everything possible to disseminate reliable information about vaccines. Users of this platform, as well as its affiliate network - Instagram, will be sent to WHO pages containing the most important facts about immunization and its results.

Representatives of WHO and Facebook have been negotiating for several months and eventually developed mechanisms that will bring truthful information about vaccines to millions of people. WHO information is published in several languages, which will make it possible to disseminate vaccine data in all regions of the world.

“Vaccines can prevent many dangerous diseases. These are measles, diphtheria, hepatitis, polio, cholera, yellow fever, flu, the WHO Director-General Tedros Gebreyesus said in a statement. “Large digital companies are accountable to their users, and they must do everything possible to ensure that people have access to reliable vaccine data.”

According to WHO, vaccines help save up to 3 million lives annually. Social networks play a very important role in the dissemination of information about vaccines. Unfortunately, they say in WHO, this role is often negative - distorted and false data on immunization are often published in social networks. As a result, parents refuse to vaccinate their children. Every year, about 20 million children in the world are left without vaccinations.

“False information about vaccines - just like the diseases they prevent - can spread very quickly, especially on the Internet. And after that, it’s very difficult to convince parents of the need for vaccination, ”said Henrietta Faure, head of the UN Children's Fund (UNICEF), at the June high-level meeting at UN headquarters, which was devoted to the problems associated with the rejection of immunization.

Faure cited a recent case in Pakistan when a group of anti-vaccination activists distributed a fabricated video on the Internet proving that polio vaccines allegedly cause serious side effects. As a result, about a million children did not receive a vaccine against this dangerous disease.

WHO recalls how successful the international community has achieved in public health through immunization. “Today, we are very close to ending polio completely. Measles mortality reduced by 80 percent. Tetanus among newborns was defeated in almost all countries, with the exception of 13, ”Fore said.