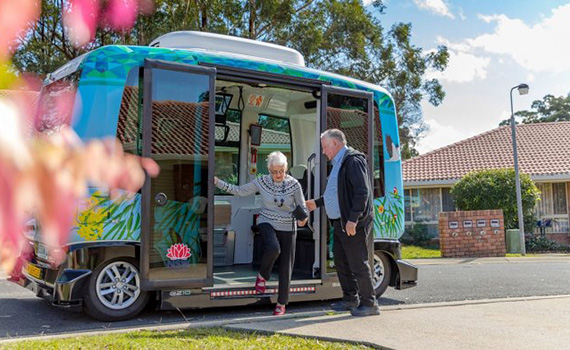 The authorities of New South Wales (Australia) launched in the city of Coffs Harbor the second stage of the “BusBot” program for operating unmanned public transport in real conditions. Initially, robots-shuttles of the EZ10 model from the EasyMile company drove vacationers along the pier, but now they have been entrusted with a more valuable cargo - from now on they are transporting old people to the village-sanatorium of Marian Grove Retirement Village.

Via public transport service has developed a simple smartphone application with which you can call an unmanned bus. But this is not a personal taxi, so you need to proceed to the bus stop, which the application indicates. Embarkation and disembarkation are carried out only at stops, and the area of ​​travel is limited to the territory of the village.

The BusBot concept also implies that unmanned vehicles provide collective, public services. Riding alone will not work, the system monitors the availability of seats, analyzes the disembarkation points and builds a route so as to transport all passengers as soon as possible. And along the way, pick up new ones - this can be a nuisance, but the service is free.

The second stage of testing buses-drones will last about 22 weeks. If the test is successful, the robots will start working in the busy business center of Coffs Harbor.