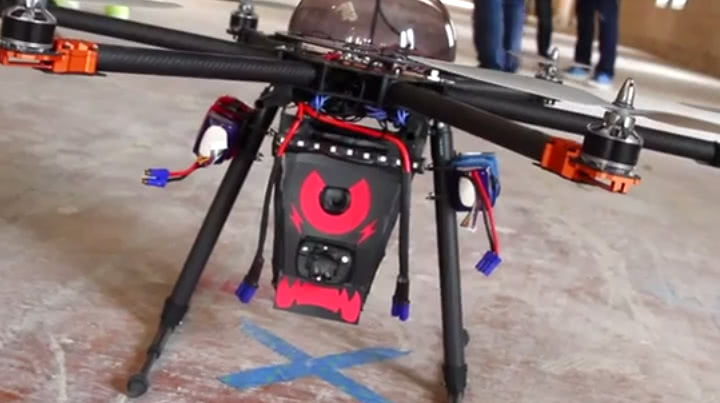 For use by law enforcement agencies of the Russian Federation, a drone-paralyzer was developed, equipped with a stun gun and a blinding laser, said advisor to the general director of the Scientific and Production Association of Special Materials (NPO SM) Yury Klenov.

“A terrorist, a criminal or an adversary can be neutralized even in a shelter or through a window pane,” said Klyonov.

At first, operators will, of course, control the tasers. But one can imagine that in the distant future, patrolling the area and neutralizing criminals will be carried out algorithmically.

It is reported that the drone weighs a little more than one kilogram and is equipped with a remote stun gun, as well as an LED or laser blinding device, which causes a person to temporarily lose sight without adverse health effects.

A video camera is also installed on board the vehicle so that the operator can remotely control the drone and decide when to use the weapon. Additionally, a loudspeaker, a siren and a thermal imager can be installed on the drone, according to the manufacturer.

The device can be used both in the city and in open or mountainous terrain. Use of the drone is especially effective in places where access to a person is difficult. To neutralize a criminal, you no longer need to risk human lives.

The UAV demonstration will be held at the Third Scientific and Technical Forum "Day of Advanced Technologies of Law Enforcement Bodies of the Russian Federation", and in June it will be shown at the Fifth International Military-Technical Forum "Army-2019".

Drones with non-lethal weapons develop and abroad. For example, in October 2016, the American company Taser International developed drones with stun guns for the US police.

Some experts approved the idea but expressed concern that such technologies may be negatively perceived by society: “From a purely tactical point of view, I see the potential value of this, but I also understand how it will alarm people. Many will be sure that if you can attach a stun gun to the drone, then what will keep you from attaching a firearm there, ”said Jim Buehermann, head of the research group of the Police Foundation.

The effectiveness of the use of drones against criminals was proved in July 2016, when in Dallas with the help of a drone stuffed with C-4 explosives, an armed man was killed, who had killed five police officers before.