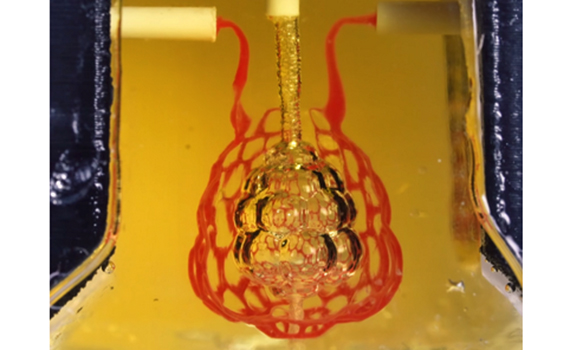 Scientists have made a breakthrough in the bioprinting of human organs 07.05.2019    10:43 / Interesting information

Last month, Israeli researchers managed to print on a 3D printer the world's first living heart made from human tissue. Now, bioengineers from Rice University have announced a revolution in tissue bioprinting. Scientists have created intricate vascular networks that can mimic natural "tunnels" for blood, lymph and other vital fluids.

In the course of the study, bioengineers created a hydrogel model of an airbag that mimics the lungs, in which the airways deliver oxygen to the blood vessels. Also, experts conducted experiments on mice that were implanted with bioprinting constructs using liver cells. The researchers note that one of the biggest obstacles to creating functional tissue substitutes was the inability to print a complex vascular network, which serves to transport nutrients inside the body.

The ultimate goal of the team of bioengineers is the possibility of bioprinting healthy and functional organs using the patient’s own cells. As a result, when they are transplanted in a person should not occur rejection. It also eliminates the need for donors.