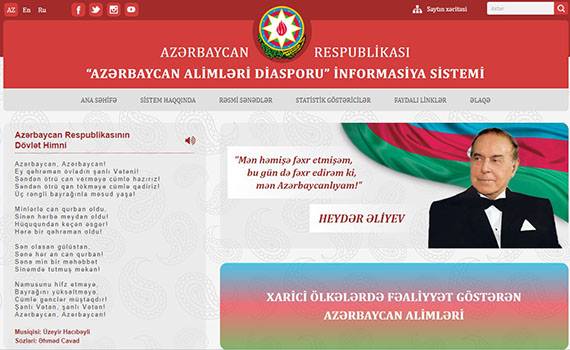 As is known, one of the priorities of the foreign policy of the Republic of Azerbaijan is to strengthen the activities of the diaspora and increase its efficiency. This policy covers the development of relations of Azerbaijanis living abroad, the protection of their cultural and political rights, the contribution of the diaspora to the development of interstate relations, the promotion of the country's national interests and the strengthening of influence in the political arena.

By a decree of the President of the Republic of Azerbaijan Ilham Aliyev dated September 20, 2016, the “State Program for the Implementation of the National Strategy for the Development of the Information Society in the Republic of Azerbaijan for 2016-2020” was approved. Within the framework of this program, the National Academy of Sciences of Azerbaijan made a decision to develop the information system “Azerbaijani Scientists Diaspora  ”, and the execution of this order was entrusted to the Institute of Information Technology of ANAS.

Recently, the information system “Azerbaijani scientists Diaspora ”, www.elmidiaspora.az, has been put into operation, which meets modern requirements. The main purpose of the website is to create a single source of information about Azerbaijani scientists working in foreign countries, recognition of their achievements in the country and in the world, as well as expanding opportunities for joint cooperation.

According to statistical data, in 500 countries around the world, 500 Azerbaijani scientists operate, of which 197 in Russia, 134 in Turkey, and 26 in the United States. Of these, 440 are men and 60 women. These scientists mainly represent such areas of science as mathematics (91), medical sciences (54) and physics (47).

The site operates in Azerbaijani, English and Russian languages, and the site can be searched by various parameters.