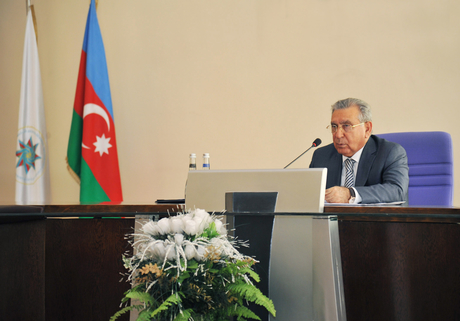 Azerbaijan`s information security has today been discussed at a meeting chaired by chief of the Presidential Administration, academician Ramiz Mehdiyev, which involved heads of the government information bodies and the country`s media leaders.

“Azerbaijan`s rapid development, the country`s becoming a powerful and important international actor, its playing the leading role in the region, active involvement in global politics and place in international organizations have become a source of serious concern for certain foreign forces, particularly Armenia, the Armenian lobby and separate circles representing their interests,” said Mr. Mehdiyev.

“Misusing the existing tolerant and democratic atmosphere in Azerbaijan, the government`s humane policy for their own ends, these circles and some internal groups are trying to mislead the society, spoil the socio-political stability and blacken outstanding achievements that our country has made.”

Mr. Mehdiyev said that “the provocative activities of anti-Azerbaijani circles and internal groups controlled by them will never prejudice the will of the government and prevent its independent policy.” “It will never prevent the society from moving forward on the path towards development and its strategic choice. Appropriate measures will be taken further on to tackle the activities contradicting Azerbaijan`s national interests and legislation,” he warned.
“Recent violence on the Armenian-Azerbaijani state border and the line of contact has revealed illegal and unprofessional activities of some mass media outlets, particularly Internet resources, and also clearly demonstrated inability of relevant public bodies responsible for information provision to properly perform their functions.”

Mr. Mehdiyev provided facts of false information about dislocation and movement of the Azerbaijani army, artificial exaggeration of the death toll, attempts to sow confusion within people living in frontline districts and the country`s society in general.

“Necessary steps must be taken to ensure that any action against Azerbaijan`s independence, sovereignty, territorial integrity and constitution or any attempt to take such actions, including those threatening the information security and national interests of the society, face the full force of the law, and I warn that these steps will be taken further on,” Mr. Mehdiyev said.

The meeting featured speeches by department heads at the Presidential Administration Novruz Mammadov, Ali Hasanov and Shahin Aliyev, chair of the Press Council Aflatun Amashov, and heads of press services of government bodies and the country`s leading mass media agencies.