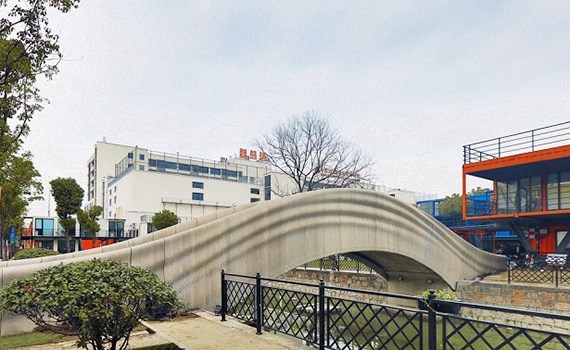 In the city park of Shanghai officially opened the first printed bridge in China with a length of 26 meters and weighing more than five tons. According to the British magazine Dezeen, it took only 35 days to prepare an unusual channel crossing. The bridge also has a warranty period: experts assure that the new element of architecture will last at least 30 years.

The bridge was made of concrete under the supervision of students at the Tsinghua University Architecture School in Beijing. The facility consists of 176 concrete blocks created using two 3D printing systems with a robotic arm. The authors of the project are especially proud of the fact that they managed to repeat the arched form of the most ancient Chinese Anji bridge, which is more than 1,400 years old.

It is noteworthy that creating a printed bridge turned out to be a third cheaper compared to traditional construction. Designers claim that they were able to reduce costs, primarily because of the lack of spending on fixtures and crates.

Now the authors want to make sure that the project is not only cost-effective but also durable, because a monitoring system has been built into the bridge that will track the deformation of the concrete over time.
Crossing the canal in Shanghai is not the first 3D bridge in the world. Know-how previously appeared in the Netherlands and Spain.