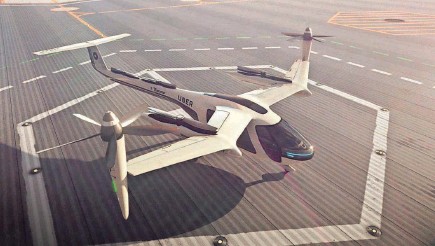 The company Uber signed a second agreement with NASA on the development of flying taxis. Transport will be a hybrid aircraft and helicopter.

The announcement of the signing of the agreement was made during the annual conference Uber Elevate Summit. The first tests of an air taxi will be held in Los Angeles and Dallas.

The presented air taxi has four horizontally rotating screws, which fold when landing. The fifth rotor is in the tail and is used to move forward. The taxi will be fully electric and will be able to travel at an altitude of 300-400 meters.

According to the company's idea, the landing sites will be on the roofs of high-rise buildings. Each of them can take 200 takeoffs and landings. It is planned that the new transport will help reduce the travel time from 30 to 5 minutes.

Earlier it was reported that Uber is preparing to submit to 2020 a working model of a flying vehicle. The presentation should take place at the World Expo in Dubai.