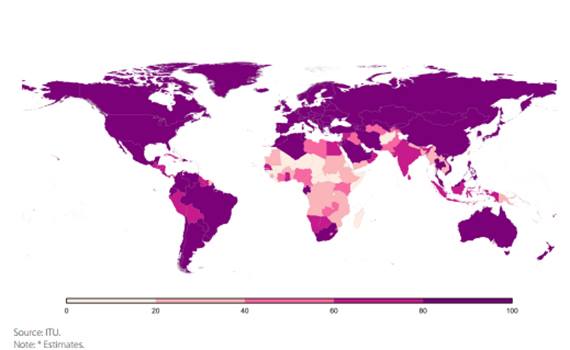 Director of the ITU Telecommunication Development Bureau Brahima Sanou announced the rating of "ICT Facts and Figures". He noted that over the past two and a half decades, ITU has contributed to the unprecedented development of ICTs worldwide and the wider transformation they have brought to society. Our new data show that young people are at the forefront of today’s digital economy with 70 per cent of the world’s youth being online.

70% of the world's youth are online

In 104 countries, more than 80% of the youth population are online. In developed countries, 94% of young people aged 15-24 use the Internet compared with 67% in developing countries and only 30% in Least Developed Countries (LDCs). Out of the 830 million young people who are online, 320 million (39%) are in China and India. Nearly 9 out of 10 young individuals not using the Internet live in Africa or Asia and the Pacific.

Proportion of individuals using the Internet, by age, 2017

Proportion of individuals using the Internet, by gender, 2017