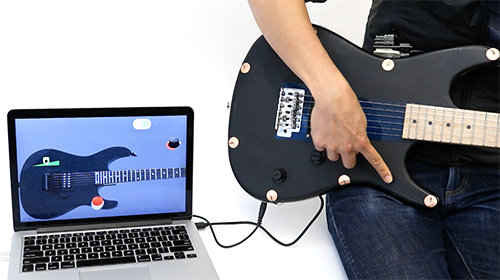 Conductive spray paint can turn any surface into a touchscreen 12.05.2017    13:00 / Technological innovations

The responsiveness of touchscreens makes them exceptionally useful—whether it’s at airport check-ins or for fast food restaurant orders—but most can only be found on flat surfaces made of glass. A new technique to transform almost any object into a touchscreen could soon change this. Researchers from the Future Interfaces Group at Carnegie Mellon University in Pittsburgh, Pennsylvania, announced Monday that they have developed a system called Electrick, which effectively coats an object with a touchscreen using spray paint that conducts electricity.

Electrick is able to detect the location of a finger touch to an accuracy of one centimeter, meaning it can sense virtual buttons, sliders and other controls can be sensed, nplus1.ru reports.

This is not the first development of Future Interfaces Group in the field of new touch interfaces. Previously, the laboratory experts suggested using the skin of the hand as a touch-interface for smart clocks. In addition, there are developments in the field of elastic touch panels (1, 2), which can also be used for complex surfaces.