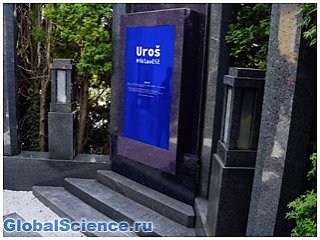 The Slovenian company developed the first and only of its kind a tombstone with a 48-inch display.

The essence of the functional of this device is to project an image or video series on the screen so that people can have an idea of ​​the deceased person: friend, relative. A surprising feature of the device was the function of recognizing the presence of a person in the cemetery.

The sensor, mounted in a granite monument, more precisely in the display, responds to the approach of a person to the grave, and then starts to display the corresponding images or video materials describing the recent years.

In the near future, such screens will appear in the cemeteries of the west, - the representatives of the entrepreneurial activity area say with reference to scientists of the highest engineering specialization.

The cost of such a screen is not yet specified. It is known that this device has already been launched in production.