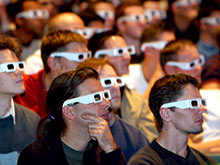 Neuroscientist Patrick Fagan, an Associate Lecturer at Goldsmiths, and  artist Brendan Walker of Thrill Laboratory have revealed watching films in 3D sharpen the brain for a protracted period. The research, in which over 100 people were exposed to stereoscopic 3D and standard format films at Vue’s Piccadilly cinema, found participants experienced a 23 per cent increase in cognitive processing - and reaction times were improved by a whopping 11 per cent.

Movie goers take part in a scientific test in Vue Piccadilly (Lndon, UK) to understand the effects on the brain from watching 3D films. Vue Cinema commissioned leading scientists from the Thrill Laboratory and neuroscientist Patrick Fagan from Goldsmiths to undertake the consumer research which found watching films in 3D gives a mental boost, enhancing speed of reaction and the brain’s ability to process information.