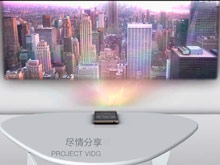 at the company's TechWorld event in Beijing, China, Lenovo took the wraps off the Smart Cast smartphone, which is based on the idea of the pico projector (or handheld projector), adding the new smartphone to the company's lineup of concept products.

Peter Hortensius, Lenovo's CTO, asserts that the Smart Cast is the first-ever smartphone to imbibe a built-in laser projector. It touts the smallest pico projector in the world as well as a gesture-based system for control. The rotating projector in the smartphone will enable people to project video games, films or TV shows on a wall with ease. Users can even project controls or keyboards to a surface that is close by.