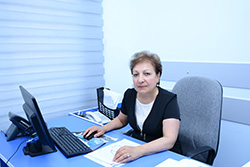 She is author of 328 scientific works. She has more 177 works were published abroad.

In 2021 she was awarded the Honorary Diploma of Azerbaijan National Academy of Sciences.