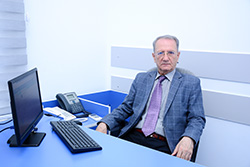 In 1973 he graduated from mechanical-mathematical faculty of Azerbaijan State University with honors.

In 1973 he was accepted for employment to the post of mathematician-programmer of the computing center of ASU by assignment, where he worked as programmer-mathematician, junior research associate, and head programmer engineer until 1978.

In 1982, he defended a doctoral dissertation at Kazan State University on specialty of “01.01.07-Applied Mathematics” on the subject of “Initial solution difference methods of bounded problems for mixed type equations”.

As of 1978, he worked at head engineer at ACS department under Institute of Cybernetics of Azerbaijan Academy of Sciences. In 1979, he was appointed to the post f leading engineer, and in 1980 – to the post of head project engineer.

As of 1986, he works as head of department at ANAS Institute of Information Technologies. During this period he participated in establishment of automated control systems of agriculture, material aid to the population, education of technical specialties.

In 2000 he obtained the title of chief research officer (docent). During recent years, he has been working on problems of development of information systems in “Euromat” computer networks, web-pages, national keyboard, automation of education process, sound recording of texts in Azerbaijani language through computers, electronic magazines, establishment of KIS of varions appointmentts.

In 2005, he was awarded the "Honorary Decree of the President of ANAS" in connection with the 60th anniversary of ANAS for his scientific and scientific-organizational activities.

He is author of more than 70 scientific articles, 30 of which were published abroad, one invention and 3 books.

In 2015, he was awarded the Honorary Decree of the Department of Physics, Mathematics and Technical Sciences of ANAS for his long-term scientific and scientific-organizational activity.

He teaches at Education Center of ANAS Institute of Information Technology.