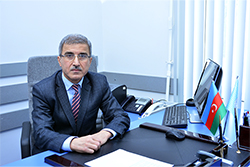 In 1979, he graduated from the Polytechnic Institute after Ch.Ildırım, "Automation and computer techniques" faculty, on the specialty "Electronic computing machines".

In 1979-1985, he worked for the Institute of Cybernetics of the Academy of Sciences of Azerbaijan as an engineer and a junior researcher.

In 1985-1992, he worked for the Department of Automatic Control Systems as a senior engineer and a group leader.

In 1992-1997, he worked for the "Electrical connection" department of Azerbaijan Technical University as a senior lecturer.

In 2015,  he was awarded with the Honorary Decree of the Department of Physics, Mathematics and Technical Sciences of ANAS for his long-term scientific and scientific-organizational activity.

He is an author of 5 research papers and 7 inventions.

Currently, he is the deputy director on general affairs of the institute and the head of the department, which conducts practical and experimental work, which improves repair and adjustment of personal computers and their technical capabilities.