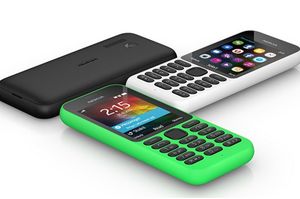 The cheapest-ever feature phone with internet connectivity has been kicked off 07.01.2015    10:00 / Interesting information

Microsoft has launched the Nokia 215, its cheapest internet-ready feature phone yet.

The move shows the company isn't abandoning feature phones carrying the Nokia brand, despite recently dropping the brand name for its smartphone line.

The Nokia 215 is the latest member of Microsoft's Series 30+ feature-phone family. The device arrives with a few smartphone characteristics - plus the trademark Lumia bright green colour scheme - and is both far less capable and much cheaper than any of Microsoft's Windows Phone handsets.

Feature-wise, the Nokia 215 isn't dramatically different to last year's Nokia 225 except for its price tag. The new phone costs just $29 before taxes and subsidies - compared to the 225's $54 price. As with Microsoft's other basic and feature phones, the 215 is aimed at first-time mobile phone buyers or people who want a second phone.