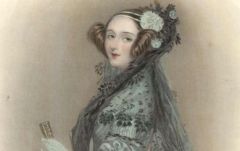 Ada Byron was the daughter of a brief marriage between the Romantic poet Lord Byron and Anne Isabelle Milbanke, who separated from Byron just a month after Ada was born.

Ada called herself "an Analyst (& Metaphysician)," and the combination was put to use in the Notes. She understood the plans for the device as well as Babbage but was better at articulating its promise. She rightly saw it as what we would call a general-purpose computer. It was suited for "developing and tabulating any function whatever. . . the engine [is] the material expression of any indefinite function of any degree of generality and complexity." Her Notes anticipate future developments, including computer-generated music.