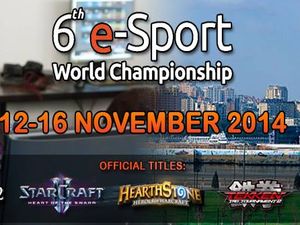 The sixth International e-Sports Federation World Championship is right around the corner, with the participating teams having five players of the same nationality. Teams such as NewBee and MVP.Phoenix will represent their respective countries, after earning their spot through the online qualifiers earlier this fall. The event is scheduled to take place from November 12th through 16th at Baku Crystal Hall in Baku, Azerbaijan.

This event will be hosted by the International e-Sports Federation, is an international organization based in South Korea consisting of 42 international e-sports organizations that aim to get e-sports recognized as a legitimate sport. This will be the second international tournament (out of Korea) of the same host, the previous being in Bucharest, Romania in 2013. Although this is the first year DotA2 is included in this event, the title will be receiving the largest portion of the prize pool. The same event also features competitions for Hearthstone, Ultra Street Fighter IV, Starcraft II, Tekken Tag Tournement 2.