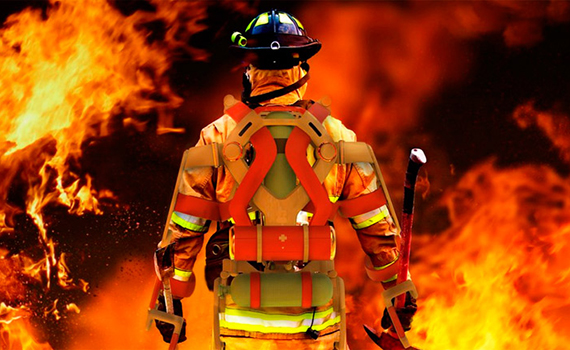 Protective suits of a new type, developed by scientists from Belgium, can protect firefighters from the dangers caused by extreme thermal exposure. We are talking about protective clothing with overheating sensors, created as part of the Flemish I-CART project.

The costume, which was attended by the staff of the Imec research center, as well as scientists from the University of Ghent and specialists from Connect Group and Sioen, is equipped with special sensors that should exclude cases of protective clothing ignition. New clothing for firefighters was developed at the request of BSPP (Paris Fire Brigade).

"Usual heat-resistant suits protect firefighters from burns only to a certain temperature level. It is not always possible to determine this level, therefore fire fighters sometimes risk their health and life. We developed clothes with built-in temperature sensors that can minimize the risk of burns," say the creators of the new protective clothes for firefighters, adding that at a critical temperature an audible alarm is triggered, warning the firefighter about mortal danger.

According to planet-today.ru, the new clothing for firefighters fully complies with the EN469 standard in force in Europe. The Paris fire brigade has already tested the suit at temperatures up to 1200 degrees Celsius and confirmed its effectiveness - tests, in particular, showed that the electrical elements built into the clothes and the battery are not dangerous for people working at extreme temperatures.