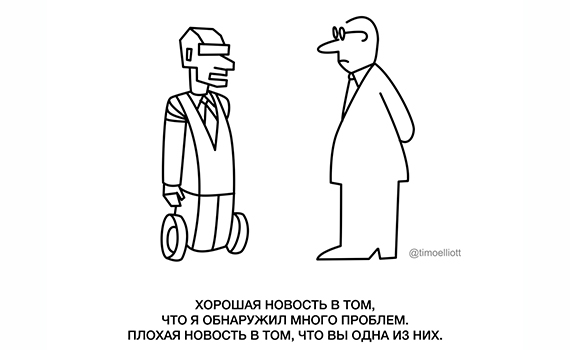 Can every technological novelty be called “artificial intelligence”? 21.01.2020    17:28 / Interesting information

According to habr.com, most managers and marketers call artificial intelligence everything in a row: vacuum cleaners, toy transforming robots and even the selection of mobile tariffs. This is a trend and sells well, there is only one problem - even scientists do not run the risk of saying that they created AI.

We decided to understand the definitions: can we even talk about artificial intelligence, how it differs from machine learning, and is it fair to scorn contemptuously when we see another advertisement with AI.

The definition of artificial intelligence from Wikipedia is abstract and universal, like a horoscope.

This wording does not mean anything, because it is not clear what is considered “intellectual” in the world of machines. Wikipedia writes about intelligence as the quality of the psyche, and only living things have this thing.

Globally, the topic of AI is not simple, because even among specialists there is still no universally accepted definition - everyone understands artificial intelligence in their own way.

Therefore, we decided to look at what laboratories and departments that are engaged in AI research are studying: Moscow Institute of Physics and Technology, Speech Technology Center in ITMO, ISA RAS, laboratories in companies and corporations (for example, Sberbank, Samsung, VKontakte) and other institutions.

1) Predictive analytics - data mining based on which algorithms can make a forecast. For example, when Sberbank decides to grant a loan, their Big Five technology analyzes the customer’s social networks, draws up a psychological portrait and evaluates its reliability.

2) Recommender systems - algorithms that select objects for the user: content, products and offers. We are all familiar with this: if you put “I’ll go out in the field with a horse” on YouTube at a moment of intoxicated sadness, the hosting will remember you as a Lube fan and offer to listen to the battalion commander.

3) Computer vision and image recognition is an area of ​​AI that teaches computers to interpret and “understand” the visual world. It is used, for example, in unmanned vehicles or in services like FindClone, which finds people on VKontakte by photo.
4) Synthesis, recognition and speech generation are what Siri, Alice and other virtual assistants can do.

AI is often confused with machine learning, but this is not true. ML is often used for these tasks, because with its help it is convenient to analyze information and make a decision. For example, the ml-algorithm predicts that with a 98% probability the person in the picture is a smartphone user. So the phone can be unlocked.

But scientists do not equate ML with AI. For them, artificial intelligence is a field of research on how to get a machine to perform non-trivial tasks. And ML is a class of algorithms that serve to solve them (like cogs in a watch).

Those who like to get to the bottom say: “This vacuum cleaner is not smart because it cannot cook lasagna or argue about Kant. AI should be like an oracle that is ready to answer any question and solve any problem. ”
Such an idealistic image of a machine as a superman came to us from cinema and art. Romance AI is a smart robo-girl from the movie "She" or "Terminator", ready to solve all problems with one left. This is not a chat bot that breaks at the first request past the script.
For what snobs mean by artificial intelligence, there is a special definition: strong artificial intelligence or general artificial intelligence. A utopian algorithm that will cope with any task without clues: the same hero, capable of anything. As a man, only infallible.
The theory of strong artificial intelligence suggests that computers can acquire the ability to think and be aware of themselves as a separate person (in particular, to understand their own thoughts), although it is not necessary that their thought process will be similar to the human one.
Ordinary or as it is called “weak” artificial intelligence differs from “strong” in that it is written for specific tasks: for example, in a drone, one algorithm analyzes the road, and the other, based on these data, understands where to go. Yes, this is ML - and yes, from the field of AI. But unlike general artificial intelligence, it will not be able to act in conditions of uncertainty: to raise children or save the world.

Managers and marketers call AI all smart devices and any smart garbage that can do something itself: drive around the apartment, turn on the lights, pick up the goods.
A recent example from the advertising world: Artificial Intelligence MTS will create a personal tariff for you.
AI can be replaced with the words “algorithm” or “assistant” - for the user, the essence will not change, it's just a beautiful word.
On the banner, of course, they don’t write that MTS has a hood - maybe they have their own full-time Terminator. But skeptical about