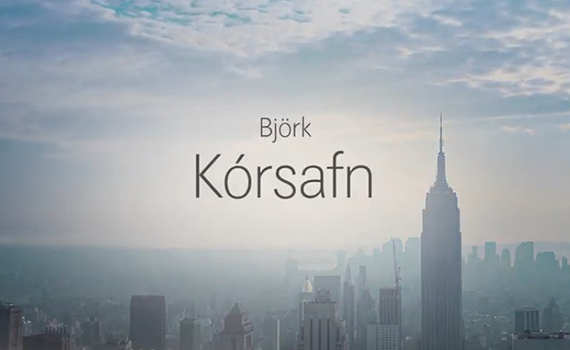 Björk and Microsoft created a music project in which AI changes the tune depending on everything around. 21.01.2020    16:03 / Technological innovations

The Icelandic singer Björk, together with Microsoft, created an unusual musical project called Kórsafn (choral archives). Artificial Intelligence from Microsoft plays continuously in the lobby of one of the hotels (Sister City) in New York excerpts from various choral arrangements of Björk's works for seventeen years. The resulting musical composition is constantly changing - the AI ​​constantly adjusts the selection of arrangements depending on the data from the cameras located on the roof of the hotel.

The Kórsafn AI project receives detailed detailed images of the outside world over the hotel in real time. Its algorithm is trained to recognize various types of clouds and their density, the presence of birds in the frame, the passage of aircraft, various atmospheric phenomena, sunrise and sunset. The AI ​​responds to every change in the picture it registered and selects the appropriate melody for it.

According to habr.com, Microsoft added the ability of additional training in the process of project implementation to the AI ​​algorithm. For example, AI can react differently to the appearance of thunder discharges, analyze the intensity of the rain, and himself study other weather phenomena to constantly generate new chains from choral arrangements. Hotel visitors have the opportunity to appreciate the creation of future music in real time. This project is also broadcast on the hotel’s website, and you can listen to how AI creates a melodic sound reality.

This is the second project from Microsoft and the Sister City Hotel, based on the concept of artificial generation of sound landscape. The first was implemented next to the hotel in April 2019. Then a simpler AI algorithm reproduced fragments of the works of Julianne Barvik.