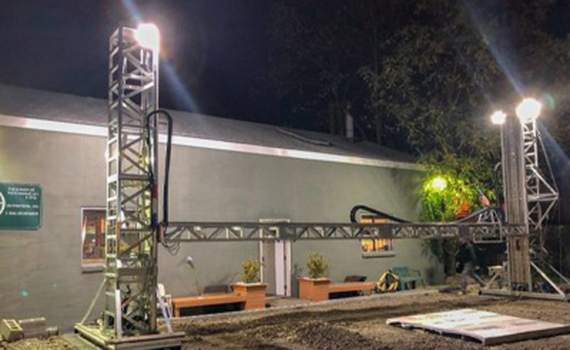 3D printing technology does not stand still. The world record for a fully 3D-printed home belongs to a 640-square-meter building in Dubai. S-Squared announced another breakthrough. She managed not only to print one of the largest buildings in the world, but also to meet her deadlines.

S-Squared has built an apartment building of approximately 177 square meters, which was built using the 3D printer SQ4D. A fully finished project took 8 days, of which only 48 hours took the print itself. The manufacturer claims that the new technology that has been tested on this building, the next time will reduce the time by exactly 2 times. For comparison, in Mexico, social homes print using 3D printers in 24 hours, but their area is only 46 square meters.

According to 4pda.ru, the price tag, which cost the construction of such a house, also looks impressive. Despite the use of refractory concrete, the manufacturer managed to keep within just $ 6,000. In addition, such a house is extremely durable and little susceptible to degradation and destruction.

Particular emphasis is placed on the SQ4D printer. S-Squared claims that it can build its own foundation, consumes little energy and reduces the number of workers to three people. The company plans to expand production capacities, which will allow printing residential buildings on an industrial scale already in 2020.