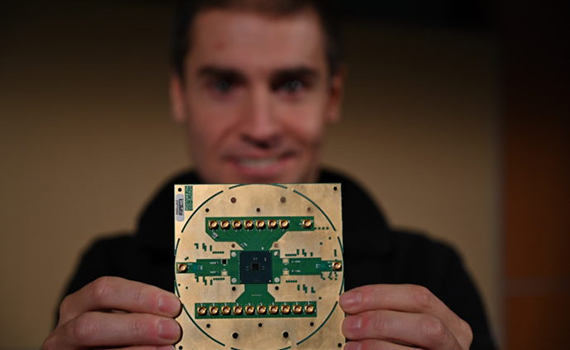 Intel announced a development that brings practical quantum computing one step closer. Codenamed Horse Ridge, the company has created a qubit (quantum bit) controller that can operate at very low temperatures. This 22nm FinFET transistor solution withstands cooling down to 4K (−269 ºC). The purpose of the Horse Ridge controller is to conveniently scale multi-qubit quantum systems to hundreds of thousands and millions of qubits in the future.

Modern quantum computing systems are multi-stage solutions. The heart of such systems - a quantum processor of only a few qubits - is enclosed in a screen impervious to radio frequency emissions and cooled to a temperature of several millikelvins, which is only a fraction of a degree above absolute zero. Control cables go out from the processor, which pass through cameras with a slightly higher temperature. These cameras contain auxiliary equipment that provides signal amplification and conversion of computer instructions into instructions that are understandable to a quantum processor. Outside, all this is controlled by a regular server rack..

According to 3dnews.ru, modern experimental quantum computers account for up to 50 qubits, but even such a small number of computing elements requires a complex and intricate cable system and connecting elements. And there is no question to increase the scale of such decisions in their current form to thousands or tens of thousands of qubits, not to mention millions of qubits. A quantum computer the size of a room can still be understood, but to create a quantum computer the size of a multi-story building will be something of steampunk. Impressive, but extremely inefficient and clearly not for commercial distribution.

Developed by Intel in conjunction with scientists from QuTech, TU Delft, and TNO (Netherlands Organization for Applied Scientific Research), Horse Ridge promises to rid commercial quantum computers of complex and intricate communications from the control rack to qubits.

Spin qubit processors can operate at higher temperatures than cryogenic quantum processors. So, Intel was able to bring the operating temperature of such a processor to 1.6 K. Someday, Intel is sure, controllers and qubit processors will be able to work at the same temperature and simplify the structure of quantum computers even more. This will open a direct path to the emergence of mass commercial quantum computers and to incredible new discoveries that are beyond the reach of classical supercomputers.