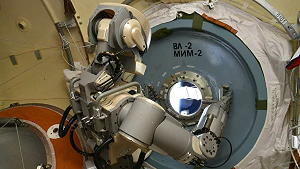 At the scientific conference at the Cosmonaut Training Center, the developer of the Fedora robot NPO presented his vision of the development of anthropomorphic space robotics - one of the android’s descendants will become a “centaur”, another will be able to walk around the Russian lunar base after 2035.

According to the presentation of the executive director of the NGO Evgeny Dudorov, after the flight of the Fyodor robot on the Soyuz spacecraft as part of the continuation of the Tester experiment, similar to Fyodor robots will fly on the Orel spacecraft in an autonomous orbit around the Earth, and then on ISS.

In 2036–2040, it is planned to create a completely new humanoid robot in the framework of the “Test 2.0” project and send it to the Russian lunar base. Prior to this, in 2031–2035, it was proposed to launch a kind of “centaur” on the moon - a robot with a humanoid upper part and a chassis instead of legs. The project was called "Rover-AT."

In parallel, within the framework of the Teledroid project, a robot is being created (looking like a torso of a man without legs) to solve problems in outer space. Such a robot is designed for operation on the outer surface of the ISS Scientific Energy Module. The launch of the module is planned, as previously reported, in 2022.

In the years 2031–2035 it is proposed to implement the second stage of work. Teledroid 2.0 will be designed to work on the surface of a near-moon station.

The program also found a place for the Cosmorobot robotic complex from the Central Research Institute of Robotics and Technical Cybernetics. Work on this topic was closed this year, although it was planned that in 2020 the robot will already be created, but it is indicated in the roadmap for the future.

The Fedor robot itself went into low Earth orbit on August 22 on the Soyuz MS-14 spacecraft. Five days later, the ship moored from the second attempt to the ISS. The robot returned to Earth on September 7th. During the flight, he completed a number of tasks under the control of an astronaut.

The executive director of Roscosmos, Alexander Bloshenko, confirmed to reporters today that the career of the Fedor robot that had flown to the ISS is over.