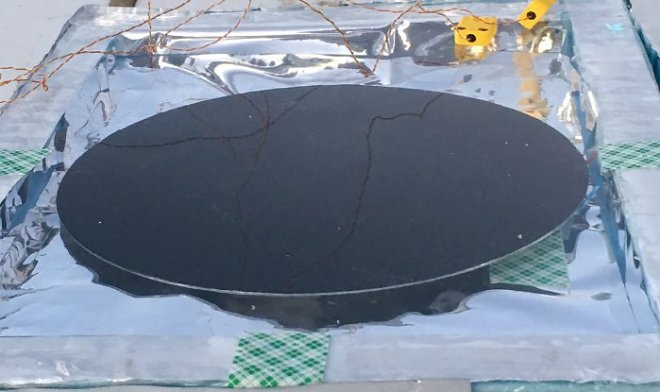 Materials Specialist Aaswat Raman led a team of students at Stanford and California Universities to develop a prototype “night” power generator. It is based on the phenomenon of temperature differences during dark, when objects heated by sunlight for a day begin to transfer heat to cold air. If you place a generator on the border of two media, he will be able to turn this process into a renewable energy source.

The idea of ​​such a generator arose when discussing ways to improve solar panels. Due to the circadian rhythm in the conditions of our planet, they stand idle for half the time, while darkness reigns. However, sunlight also carries heat that accumulates in illuminated objects during daylight hours and can then be used at night. It remains to apply the well-known thermoelectric effect and design a suitable generator.

In the center of the unit is a heat exchanger in the form of an aluminum sheet painted black. It is hidden in a polystyrene shell, which transmits only infrared radiation. A conventional thermocouple is connected to the heat exchanger, and a signal LED is connected to it. When the metal heated during the day begins to transfer heat to the cold night air, the thermocouple generates electricity and activates the LED.

The prototype generates 25 milliwatts per 1 sq.m. The developers have calculated that with optimal calibration and under ideal conditions, they can get up to 500 milliwatts per square meter. A little, but not bad - after all, we are talking about a passive and renewable energy source. There are many places in the world where the use of classic solar panels is unprofitable, but there is enough sunlight. And there, similar generators can find application for secondary purposes, such as lighting buildings or recharging gadgets.