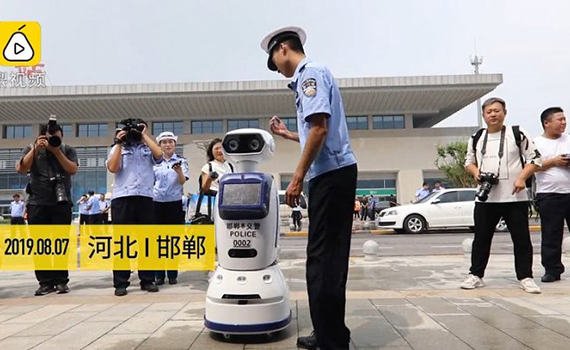 Handan City Police (Hebei Province of China) received three artificial mates - a new type of robot. They are designed specifically for the police service and are distinguished by the fact that they can independently interact with the public. That is, these are not toys and not demonstration machines, but real working robots.

The first robot specializes in patrolling streets and intersections; it keeps order and can intervene in conflict situations. The robot does not have weapons, but it is equipped with a system for identifying violators of public order, to which it issues warnings, but it can also record actions on the camera, so that it can then be fined. In addition, the police officer recognizes license plates of cars, has its own navigation system and can conduct covert surveillance on command from the site.

The second robot was created to help road safety officers. He also has no weapons, but he can pursue and even ram offenders - but only by direct order of a police officer. For example, to chase a criminal whose face his camera recognized. This robot will work at the scene of an accident, driving away onlookers and providing advice on road safety.

The third robot, the smallest, serves as an auxiliary tool when working at the scene of an accident on the streets. For example, he knows how to patrol a given perimeter, drive out hooligans, conduct video surveillance of the crowd, answer tourist questions or act as an avatar for a remote operator. All three robots use one face recognition program, which is part of the corresponding national project in China.