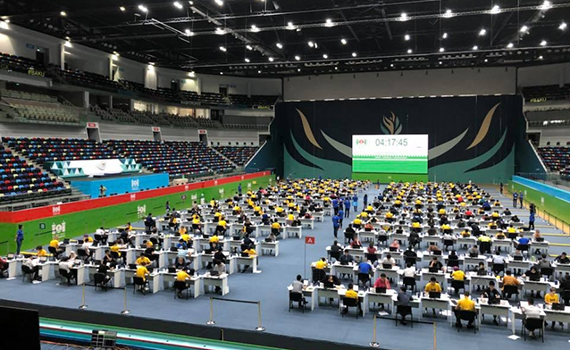 On August 6, the first day of the 31st International Informatics Olympiad in Baku started in Baku.

According to AZERTAC, students from around the world demonstrate their knowledge and abilities at competitions held at the National Gymnastics Arena.

The International Olympiad in Informatics held since 1989 and considered one of the most prestigious competitions in the field of informatics, annually creates opportunities for students from different countries to demonstrate their knowledge and abilities.

To participate in the International Olympiad in Informatics, which was first organized in Azerbaijan, official delegations from 88 countries and regions, including the Azerbaijani team, consisting of more than 600 students, teachers and experts, were registered. In this prestigious international competition, the Azerbaijani teams that previously represented our country 24 times won five medals - one silver and four bronze.]

To organize a high-level event, which will continue until August 11, places that meet modern requirements have been selected. So, the main competition will be held at the National Gymnastics Arena, the closing ceremony - at the Heydar Aliyev Center. For other events in the framework of the Olympics, the Boulevard Hotel is provided. For the duration of the competition, students will be accommodated in the Athletes Village. An entertainment area for participants will function here, thanks to various events and an interesting program, they will be able to effectively spend their free time after the competition. As part of the cultural program, excursions to Gobustan, Yanardag, Ateshgah, the Nobel Brothers House Museum and several other places will be organized.

The International Olympiad in Informatics , which is important for our country, is held at the initiative of the Ministry of Education of the Republic of Azerbaijan with the support of the ADA University, the Ministry of Transport, Communications and High Technologies and other government agencies.

The official global sponsor of the Olympics is Acer. In addition, local companies will support the event - the country's leading mobile operator, Azercell Telekom, as the “Digital Talent Sponsor”, and PASHA Bank as the “Talent Sponsor”.