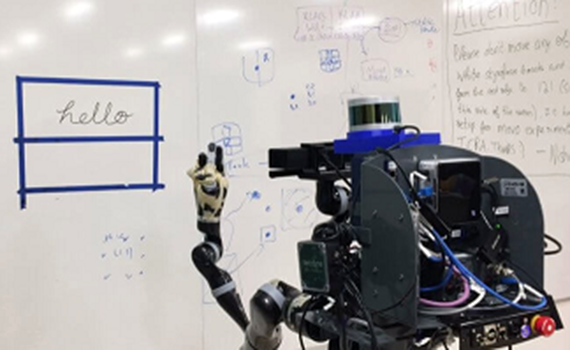 The ability to write words on paper seems like a fairly simple human skill, but in fact it is extremely difficult. Just think - to learn how to write, you need to understand at what point you need to lower the tip of the pen, how long and in which direction to drive the line, and where to stop.

Despite such a variety of actions, researchers from Brown University managed to teach the writing system of the robot, and now it can quickly write words in different languages ​​on the board, and even copy simple pictures.

The author of the algorithm implemented in the robot is a student named Atsunobu Kotani. It was his work that allowed the robot to understand exactly which brushstrokes and in what order to do in order to depict certain hieroglyphs of Japanese on the board. The created training system consists of two models: “local”, where the algorithm monitors the current position of the pen, and “global”, where it is responsible for moving to the next letter. Robot and human skills

To test the performance of the algorithm, the researchers conducted a test - they wrote a Japanese word on the board, and allowed the robot to copy it. The algorithm showed itself from the best side and, although it made mistakes in the order of the strokes, the characters written by it turned out to be quite legible.