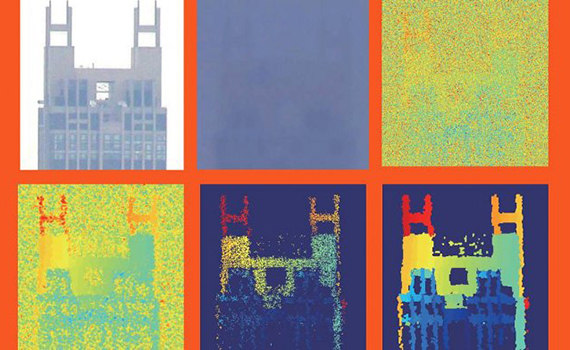 Physicist Zheng-Ping Li and his colleagues from the China University of Science and Technology in Shanghai developed a system for photographing at distances of tens of kilometers, even in the city. The urban environment is very unfavorable for such work - there are many parasitic sources of light, evaporation, etc. in it. The presence of moving objects and environmental pollution also imposes its imprint - but it is in the cities that a large-scale monitoring system at long distances is needed.

The basis of the Lee installation is an innovative photon lidar - a detector capable of catching a single photon. For example, as part of a pulse reflected from a target, in order to measure the distance by the return time. The device is sensitive enough to see objects at a distance of 10 km, but the team of Lee went further and assembled the installation at the base of the telescope, which sends and receives photon beams at a distance of 20, and at the limit of possibilities and 45 km.

The system uses an infrared laser with a wavelength of 1550 nanometers, a frequency of 100 kilohertz and a power of only 120 milliwatts. It is safe for the eyes and allows you to experiment in the city. The main merit of the Chinese scientists is in the development of the gating algorithm: they learned how to calculate the “time window” of the photons return from the target and filter out all other parasitic photons from this data. Including sunlight, which creates a major problem with such observations. As a result, where ordinary optics show solid noise, features of the object begin to appear.

The accuracy of the camera is amazing - when shooting from the roof of a 29-story skyscraper on Chongming Island, Shanghai, testers accurately calculated the number of windows in the airport building in Pudong, about 45 km from them. And, in addition, they improved the resolution of the system from the previous minimum of 1 m to 60 cm. And all this with the help of equipment that fits into a container the size of a shoebox! Now Lee and his colleagues intend to overcome the 100 km bar, and also to improve the algorithms - if the gating is properly varied, it is possible to output the measurement results immediately in the form of three-dimensional models.