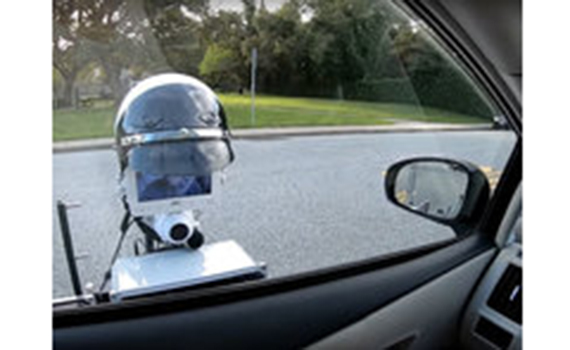 An engineer named Ruben Brewer of the American non-profit research institute SRI International has created a prototype robot that can replace a patrol officer while checking the driver’s documents on the road.

The robot is mounted on a telescopic rod along the left side of the patrol car, and after stopping the car that the police officer wants to check, the bar moves forward so that the robot faces the driver’s window. In this case, the device expands the bar with spikes under the bottom of the car in case the intruder tries to escape. To interact with the driver, the policeman uses the screen and camera, as well as a scanner for documents and a printer, writes N 1. A small video demonstrates the process of the patrolman’s communication with the driver.

According to Brewer, using a robot instead of direct contact between the patrol officer and the driver will reduce the likelihood of a conflict, as well as protect officers from injury and death if an armed criminal turns out to be driving a stopped vehicle. So, according to the data provided by the creator of the robot, about 100 drivers and patrolmen die each year as a result of such conflicts on the US roads.

Recall that in March it was reported that the New York Police Department since 2016 has been using software designed to find similarities between new and previously committed crimes. Automation of this process allows detectives to save time, which previously took to study materials manually. A program called Patternizr is a proprietary department. With its help, analysts in all 77 police stations in New York can look for similar details in various crimes committed in the city. In particular, the system allows you to quickly compare with the base the details of thefts and robberies and in practice helps to catch the criminals who have committed violations in different areas.