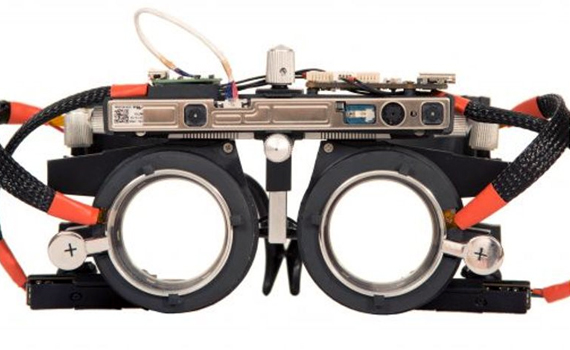 The complex optics involved with putting a screen an inch away from the eye in VR headsets could make for smartglasses that correct for vision problems. These prototype “autofocals” from Stanford researchers use depth sensing and gaze tracking to bring the world into focus when someone lacks the ability to do it on their own.

It works like this. A depth sensor on the glasses collects a basic view of the scene in front of the person: a newspaper is 14 inches away, a table three feet away, the rest of the room considerably more. Then an eye-tracking system checks where the user is currently looking and cross-references that with the depth map.

Having been equipped with the specifics of the user’s vision problem, for instance that they have trouble focusing on objects closer than 20 inches away, the apparatus can then make an intelligent decision as to whether and how to adjust the lenses of the glasses.

In the case above, if the user was looking at the table or the rest of the room, the glasses will assume whatever normal correction the person requires to see — perhaps none. But if they change their gaze to focus on the paper, the glasses immediately adjust the lenses (perhaps independently per eye) to bring that object into focus in a way that doesn’t strain the person’s eyes.

The whole process of checking the gaze, depth of the selected object and adjustment of the lenses takes a total of about 150 milliseconds. That’s long enough that the user might notice it happens, but the whole process of redirecting and refocusing one’s gaze takes perhaps three or four times that long — so the changes in the device will be complete by the time the user’s eyes would normally be at rest again.

“Even with an early prototype, the Autofocals are comparable to and sometimes better than traditional correction,” reads a short summary of the research published for SIGGRAPH. “Furthermore, the ‘natural’ operation of the Autofocals makes them usable on first wear.”