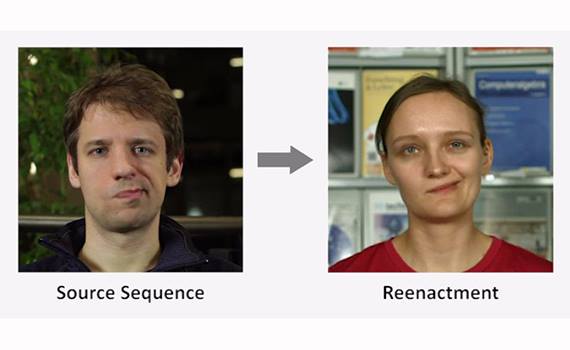 Artificial Intelligence transfers facial expressions from one video to another 13.06.2018    16:32 / Technological innovations

Researchers made a breakthrough on the way to creating a realistic synthesized video. A team of scientists from Germany, France, the United Kingdom and the United States used artificial intelligence to transfer the head tilt, facial expressions, and human eye movements from one video to another.

The result of the work of the neural network looks very realistic and convincing. The essence is simple: a person is in front of the camera and repeats a certain set of mimic expressions and articulates phrases. Artificial intelligence analyzes the data and transfers it to another video - the person photographed on it begins to repeat precisely the same movements, words and inclination of the head.

A neural network created by researchers needs only a few minutes to process the received video, then it transfers and synchronizes the data with the target video file. The system can even manipulate some background shadows when necessary. The synthesized result is almost indistinguishable from the source file.

he team compares its method with a number of similar studies, including - with last year's. Then the developers used a neural network to manipulate the existing video, synchronizing it with various audio recordings. The new method makes articulation and facial expressions more realistic and accurate.

The scientists involved in the project note that this neural network will be useful for VR, film production and post-production in general. But it is quite obvious that you can use the system with bad intentions: in information wars, for moral violence, when creating fake news and for other purposes.

"I know about the ethical consequences of such developments," said Justus Theis, one of the project researchers. - This is one of the reasons why we published the results. I think it's very important that people learn about how their opinion can be manipulated. "

The work will be presented at the annual SIGGRAPH conference, which will be held in August.