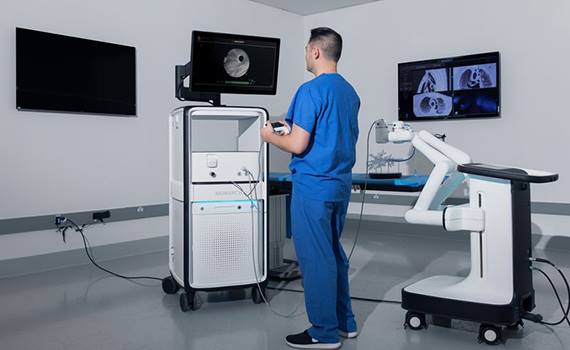 Auris Health has taken another step in the fight against lung cancer. The organization presented an improved version of Da Vinci's robot-surgeon - the development of Monarch, thanks to which it is possible to carry out endoscopy.

Monarch is equipped with two hands and has a special tube, through which the doctor controls the camera and surgical instruments in the internal organs of man. At this stage, the robot is controlled by the similarity of the game console. But in the future the device will work autonomously.

The main goal of Monarch is the treatment of lung cancer. Diagnosis of the disease in the early stages is extremely difficult. Due to the fact that the diagnosis is made in the late stages of the disease, the disease is incurable in 90% of cases.

According to the company's CEO Frederic Moll, ineffective diagnosis is associated with screening based on manual bronchoscopy, which limits the range of motion. With the help of the robot Monarch it will be possible to wade into the lungs, into their inaccessible zones.

The development has already been approved by the Food and Drug Administration (FDA), and the device is being prepared for the first tests.